AND then we had to call the cable guy...

During the harrowing health adventures I described in my last post, my poor, beleaguered husband was also having to move us to another apartment, because our lease was about to run out, and the owner of the condo we were renting had decided to sell.  (The appliances were older than I am, and even less "work-brickle," as we say where I'm from.  Believe me, both sides were ready to say good-bye.  Our new place is much nicer, thank God, even if it is smaller.)  With me unable to pick up the SuperToddler, let alone pack and move boxes, because of my recent hernia surgery, Good Man Michael has been doing most of this on his own, with the aid of his parents and a few faithful volunteers from church.  (THANK GOD FOR OUR NEW CHURCH!)  Meanwhile, I have been untangling things like forwarding addresses, cancelling old utilities, establishing new ones, and calling the cable company to set up FOUR DIFFERENT APPOINTMENTS (so far) to switch service from our old to our new place.

The point, however, is that I DO have internet again, so I can once again BLOG.  And let me show you by far the best aspect of our new place. 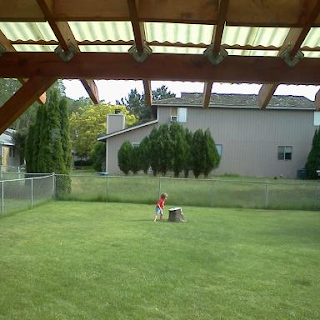 Yes, that is my SuperToddler enjoying her brand-new, fully fenced-in back yard, the whole of which I can observe through the lovely French doors at the back of our living room.  This arrangement makes everyone extremely happy. 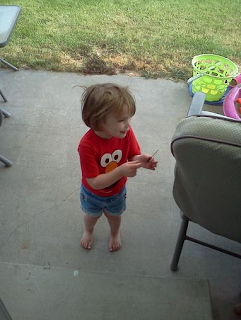