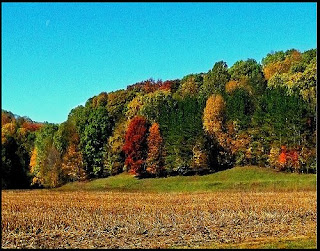 I love Indiana when it's like this. Earlier this week, we had a grey, drizzly, windy, cold, dismal day. The average person would have thought I was crazy, but it was autumn in Indiana to me, and I was thrilled. Within another two days, the leaves had come out in their brilliant colors. Indiana is a crazy place; it's hot and horribly humid in the summer. The Ohio River Valley is the allergy capital of the world. Winters are rainy and gloomy, with an occasional crippling blizzard breaking up the monotony. And God help me, I love it.
at 12:57 PM No comments: Links to this post 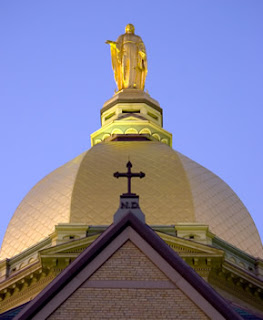 Wow, do I have a big weekend ahead of me! Tomorrow, I'm headed up to South Bend, Indiana, to meet with a professor from the Theology department at Notre Dame. I'm beginning the process of applying to their Ph.D. program, so I wanted to establish a personal contact with someone there, especially since this professor is the primary reason I want to get into this program. I've never seen Notre Dame before, so I'm nervous about the appointment, but excited about the trip.
From there, I will be headed to Chicago, where a distant cousin of Michael's is getting married, so I'll finally meet more of my Ukrainian in-laws. I'll be attending my first entirely Ukrainian-speaking Orthodox church, so this should be interesting. Far more importantly, I'll get to see Michael for the first time in over a month. It's going to be a big weekend!
at 8:38 AM No comments: Links to this post

So, last weekend I attended that bastion of Orthodox education--and fundraising--the parish festival. The nice thing about this particular festival is that the parish behind it all--All Saints Antiochian Orthodox Church in Bloomington, Indiana--has members from every traditionally Orthodox country, and large numbers of American converts. In other words, the food and entertainment program did not imply that Greek dance or Russian foods are an integral part of the faith. It was a truly multicultural event. It was a nice change.
at 8:30 AM No comments: Links to this post 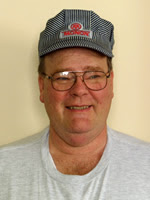 OH. MY. GOD. THE. BOOK. IS. DONE!!!! O.kay, for those who have no clue what I'm talking about, back story.
For the past three months, I've been writing a book about--well, a lot of things, but primarily about my father, and about how my Pentecostal pastor father influenced me to become Orthodox, though he could never have known he was doing so at the time. I don't even remember how many books I've started writing in my life; I wrote my first real story when I was 10, and started my first novel when I was thirteen. This book is the first one I've ever actually finished.
The terrifying part about finishing a book, of course, is that I now begin asking myself, is it possible that anyone will ever publish it? That anyone other than my mother and my husband will even ever read it? But since I only finished it a few hours ago, I think I'll just let myself bask in the reality of having finally completed one for a while.
at 6:17 PM 1 comment: Links to this post 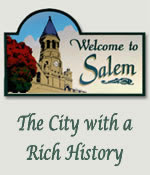 It's a funny old life, as Sandy on the BBC's As Time Goes By once said. Born and raised in Salem, Indiana, a small and insular town located some 45 minutes north of Louisville, Kentucky, I have traveled to (or through) Germany, the UK, Kazakhstan, Uzbekistan, and numerous major cities in the US. As a teenager, I swore that I would "shake the dust of this one-horse town off my feet and do great things." Then I met New York City, and the nearby suburb in which is located St. Vladimir's Orthodox Theological Seminary, where I have spent the last three years of my life. Suddenly, Salem seemed a bastion of sanity, civility, and neighborly hospitality, not to mention perhaps the only place left on Earth where people sometimes acknowledge a traffic law or two. In case you don't yet know, I hate New York--not just the city, the entire state. The only place I hate more than the entire state of New Jersey, which has all the noise, stink, rudeness and pollution of New York but without the wonderful Metropolitan Museum of Art, is New York state. I love the Met; I hate New York all the more for how desperately impossible they make it to easily visit the Met. O.kay, I have vented my spleen. As soon as I discovered I was pregnant, I wanted to come home to Indiana and see my mother, and she wanted to see me. It's part of that whole "My baby is having a baby!" thing. But it seemed highly impractical, as I was trying to find a job to support us during my husband Michael's final year at seminary. Then, as so often happens in life, the curveballs began. My mother was diagnosed with lupus when I was about 13, and had been suffering from it for many years before the rather backward medical scene of Southern Indiana discovered a disease known to doctors in the rest of the US since the beginning of the 20th century. Over the years, the disease has progressed as it does, increasingly chipping away at her internal organs and causing her immune system to go haywire. The latest bout has manifested as an infection called cellulitis, and it was very serious. Mom has lived on her own since my father died 1 & 1/2 years ago, and her doctor declared that either someone would have to stay with her during her recuperation, or she would have to do a temporary stint in the nursing home. Michael and I were not about to let that happen, so here I am, back home where I belong. The bad news is that, of course, Michael had to remain in New York, so we are apart. Hopefully he will complete his last year of seminary and soon be free. But the good news is that Mom's health has improved beyond all recognition, partly because having someone here with her again has given her a new will to fight and stay healthy as long as possible. She's determined to be here to see the baby arrive and grow. It's good to be home.
at 2:12 PM No comments: Links to this post

A baby! I'm 10 weeks along, so I've had time to adjust to the idea, but it still amazes me at times. Of course, the delightful symptoms help keep me grounded--heartburn, headaches, occasional aches and pains, allergies and sinus meltdown. But I wouldn't trade them for all the world, because they remind that a tiny life is growing inside me, and at least I haven't been yarfing!! Medicaid paperwork and more paperwork, the typical complications of life, have prevented me from seeing a doctor in the past three weeks, but up to that point, I had enough ultrasounds to map the planet's ocean floors. The delight of seeing and hearing my baby's heartbeat was overwhelming! I confess, I cried--totally characteristic behavior for me. The first trimester has been scary and exciting, but the second trimester is now within sight, and I'll be glad when we get there. I'm more than ready to have some energy back! Even for a pious devotee of sleep like me, having to nap three times a day eventually becomes a bore.
at 9:56 AM No comments: Links to this post