I Actually Review a Book!

Reflections of Osiris: Lives from Ancient Egypt
by John Ray 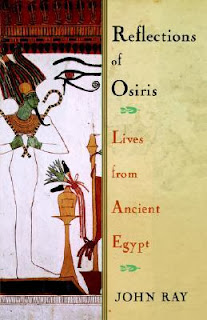 Okay, I really enjoyed reading this book--as long-time followers will not be surprised to hear--so let me enumerate its weaknesses before I dive into any immoderate praise. The author attempted to tell the story of the history of ancient Egypt by making each new chapter a brief biography of an individual Egyptian--king, priest, or peasant--about whom we know something unusual, or the knowledge of whose existence has survived to modern times because an extraordinary document was discovered. As a result, the entire book feels somewhat disjointed, and the eponymous attempt to use Osiris (Egyptian god of the dead/underworld) as the common link for all those highlighted is weak, almost an afterthought in practice, though it works in principle if you already know a bit about the Egyptian theology of the afterlife.


Now for the fun stuff. The scholarly author has an enjoyably readable style, and most importantly by far, I learned about a HOST of things of which I was previously unaware, and got much more detail about some things with which I was already familiar. So much so, in fact, that I lost a whole day researching Neith, patron goddess of the city of Sais, because of one passing reference in Ray's book that piqued my curiosity beyond endurance. Now that's MY kind of Egyptology read, especially since I've read enough on the subject by now that not just every book sparks a real quest for further detail like that anymore.

It's a lovely book, a quick read, and I can recommend it to those interested in the subject, from novices to armchair Egyptologists like me.
at 12:00 PM