Coming Home to "The Hunger Games"

Those of you who read my entry in The Hunger Games Read Along will remember my discussions of poverty and deprivation in 20th-century Appalachia (some of which has continued into the 21st century, unfortunately), and how the depiction of the Appalachian District 12 in The Hunger Games struck me so profoundly because of my own family background.  Last night, I went and saw the film, The Hunger Games, and when the opening scenes appeared on the screen, I nearly gasped.  I had come home to the mountains that I grew up visiting as often as I could in the summers, only they were those mountains as my grandmother had known them.  Shacks.  Clothing made of old, faded, nearly-rotten cloth.  The specter of the coal mines and the Black Lung lurking within them.  Welcome to Appalachia.

According to MSNBC, the entire film was shot in North Carolina, and these houses are authentic remnants of the past I've been describing, the abandoned employee shacks from a company-built and -owned mill town which long since ceased to function.  Jennifer Lawrence, the actress who beautifully portrays lead character Katniss Everdeen, was born and raised until the age of 14 in Louisville, Kentucky, a city 45 minutes from my hometown and to which I can practically drive in my sleep, I've made the trip so many times.  These are my people.  This is my home.


Until the action of the film shifted to the Capitol of Panem, it was really difficult at times for me to watch the screen without weeping, hard for me to separate the fictional scenes from my family's own genetic memories--passed on to me with my mother's milk--of poverty, the Depression, the dust bowl, farming other peoples' land in order to eke out a living, the hard scrabble for work when even those avenues failed, and the eventual need to leave the mountains and migrate north to Indiana. 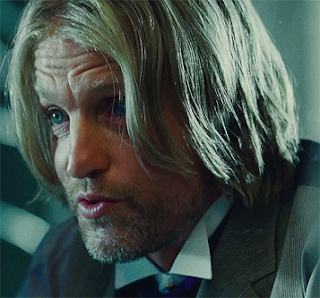 Woody Harrelson and I have always had a very complex relationship (of which he remains blissfully unaware), because he can be such a rebarbative personality, i.e. he's often a bit obnoxious and a pain in the ass.  Yet, I think we need people like that as a society, to keep us honest.  He's like my generation's Andy Kaufman.  He's also an amazing actor.  Though he, unlike Jennifer Lawrence, is not originally from "District 12," he lived and studied in Hanover, Indiana, as a young man, and in this film he brilliantly portrays the man raised in poverty, plucked from obscurity, and never again truly knowing where he belongs.  Many, many of my forebears turned to alcohol to avoid the realities of life in Appalachia, just as Haymitch has when we first meet him.  He made me truly love Haymitch as much in the film as I did when reading the book.


I enjoyed the film tremendously, despite its disturbing violence and shades of a pseudo-Nazi American dystopia; I mean, I had read the book, so I knew that's exactly what I was in for when I bought my ticket.  I was astounded at just how closely the movie stuck to the book, with only a few deviations that rarely sounded any jarring note.  The secret to this accuracy, no doubt, was revealed in the closing credits, in which Suzanne Collins was listed as one of the three authors of the screenplay.  The subtle overlay of traditional Appalachian music at strategic points was very satisfying to the little girl within me who grew up hearing Bluegrass, even if I didn't learn to appreciate it until I became an adult.  Most of all, I think they very powerfully encapsulated the sheer bloody-mindedness, the determined, cantankerous independence of a group of people who endured everything from Hadrian's forces in Scotland to the English land clearances in Ireland to Prohibition here in the US, which most of us blissfully ignored and from which quite a few of us actually made a decent living for once from the manufacture and sale of illegal brews.  We love our land, we love our families, and we love being left alone to go our own way in peace.  We couldn't have asked for a better representative than Katniss Everdeen.