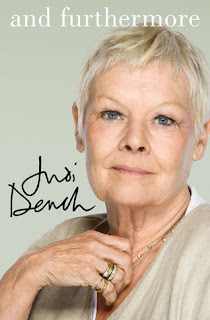 I simple ADORE Dame Judi Dench, and she IS an actual dame of the British Empire.  I think we all know that NONE of us want to get me started on the British honors system (a.k.a. that deal where the Queen goes around "knighting" people every year), the intricacies of how it works and the fact that most people who get referred to as "sir" or "dame," especially by us Americans, don't actually have a right to the title, but sufficeth to say that DAME Judi Dench DOES have a right to the title, and personally, I think she earned it.  She sweated in a lot of Shakespearean costumes and labored to give a lot of theater-goers their money's worth to get that title.  On with the review.
And Furthermore
by Judi Dench
(as told to John Miller)

Celebrity memoirs often seem like they will be simply fascinating until you actually start reading them, and then they all develop the same problem--they talk endlessly about a HUGE group of people, none of whom has the reader ever heard before.  Other actors, movie executives, agents, members of various filming crews, acting instructors and countless others are all described in excruciating detail, along with a rough sketch of their impact, for good or ill, upon the person telling his or her own story.  While this book does not entirely escape that pitfall, a couple of mitigating factors made it far better about the issue than most I've read.

First off, as we all know, Britain is quite a small island, so the number of its actors with careers as long-lasting and broad-ranging as Judi Dench's forms a pretty exclusive club.  When we take into account the fact that she has spent most of her career doing Shakespeare on stage in companies like the RSC (Royal Shakespeare Company) and the Old Vic, that club gets even much smaller.  So a number of the names she dropped at least rang a bell for me, and some were very familiar, indeed.  Secondly, Judi Dench is just so entertaining, and she so infectiously enjoys life, that I happily read her telling me stories about complete strangers!

Best of all, in this book she finally dedicated an entire chapter just to talking about television series in which she has starred, something she didn't really do in previous publications.  That chapter was all too brief, in my opinion, since I simply ADORE As Time Goes By, but it was a lot of fun to read, all the same.
at 11:06 AM