A Review, or Back to Basics

Yes, dear friends, despite a flood of posts lately about mental health, physical health (and the lack thereof), new favorite British comedies and the wonders of the fountain pen, I do consider myself a book blogger in the sense that I do read books--frequently! Constantly!--and I do review each one I finish, even if it takes me a while to get those reviews posted.  The blog is called "The Beauty of Eclecticism" BECAUSE I have all these varied interests, because I'm more than a "one-trick pony," but it's still nice to get back to basics every now and then and just review something.  Here's another golden oldie from the Review Backlog Files, the collection of hand-written reviews that I'm slowly getting transferred to the blog.  I hope you find it informative. 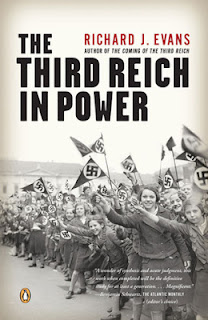 The Third Reich in Power
by Richard J. Evans

So, this is the second installment in Evans' trilogy, chronicling the Nazi movement from its antecedents to the unmitigated human tragedy it left in its wake before it was finally defeated.  The horrific saga of human depravity continues in this volume, as the author takes us inside the daily lives of Germans ruled by a newly triumphant Nazi party.

In reading about the Nazis' program and how it developed in The Coming of the Third Reich, I greatly appreciated the fact that, unlike so many historians these days, Richard Evans attempted to tell a single, unified story, presented in as chronological a fashion as possible.  Historical surveys tend to be heavily compartmentalized by subtopic--economic trends, cultural developments, social mores and so forth--and are only arranged chronologically within each of these categories.  It's a format that frankly annoys me, even though I can understand why it is useful or in some cases even necessary.  I so enjoyed the fact that the first volume of this trilogy was NOT arranged in that way.  Unfortunately, this one is arranged in precisely that fashion.

Still, I found that to be the book's only major detracting feature, and as I said, I can understand why Evans felt the subject would be too unwieldy otherwise.  This book is very thorough, and though it would no doubt be boring to those who really dislike non-fiction or have no interest in reading histories, I was absolutely spellbound by it.  Art, literature, films, music--virtually every aspect of human life, the Nazis attempted to control as much as they possibly could, even sex.  This book only covers the period between Hitler's rise to chancellor of Germany and the moment he began annexing other territories, so it really doesn't touch upon the Nazis' treatment of non-Germans, though it certainly covers the early development of their anti-Jewish policies.  The subtlety, the insidious and deceptive--even, at times, self-deceptive--nature of Nazi propaganda was breath-takingly terrifying, something I didn't fully understand until I read this book.  As in the first volume, the subject matter Evans has chosen to cover is chilling, but his handling of it is brilliant.
at 12:21 AM