People!  You will never believe the enormous oversight I have just discovered in my own reviewing history.  Fellow book bloggers, have you ever gotten so absorbed in the routine of reading and reviewing that you somehow forgot to ever write a review for one of the books that left the greatest impression on you of the whole year?!  Somehow, I managed to never review The Hunger Games!  Because I was taking part in The Hunger Games Read-Along at the time and had to post my review of a specific chapter, I seem to have somehow overlooked my usual habit of posting a full review for the book. Considering how much screen space I dedicated to it, however, I think we can consider my view of The Hunger Games well and truly explored--I found it fascinating and thought-provoking, and gave it 4.5 stars.  Having now corrected that mistake, let us dip once again into my Review Backlog Files. 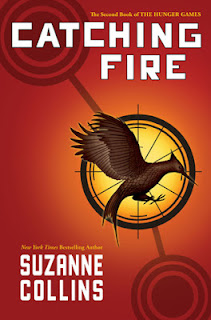 After seeing the recently released film of the first Hunger Games book, I was even more determined to read the rest of the trilogy ASAP (even though I'm sure I've got a few years to wait before THOSE movies are released).  I scarfed both of them down very quickly, staying up to unholy hours with each because I couldn't put either of them down until I finished.

Having now read this second book, I have to agree with the Tweet of one of my fellow book bloggers, which said that this book contains too much rehash of the first book.  After all, we go to another Hunger Games, we see the preliminary work of Cinna and Co. again, watch the Tributes settling into their domiciles again, being dangerously defiant before the Gamemakers again, and undergoing their training again.

It seemed a bit lame to me at first, too, but I pretty much got over that when I reached the quite literally explosive ending, which was very effective and couldn't have happened at all if Collins hadn't taken us back into the arena.  Oh, the cliffhanger!
at 11:19 PM