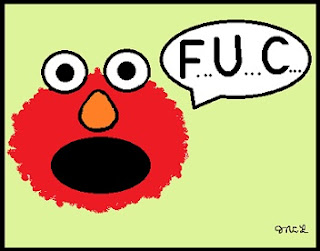 Disclaimer:  Whether you can believe it or not, the following story is absolutely true.

It's every mother's proudest moment, isn't it?  That delightful instant when her child first produces the infamous "F"-word?  Now, all those of you who know me well--or even just regular readers of this blog, frankly--will know that I love a good curse word.  My own mother tried her best to train expletives out of me, with the help of other horrified female members of our family.  I mean, it just doesn't sound good when the 3-year-old daughter of a Pentecostal preacher responds to every disappointment and frustration by loudly proclaiming, "Well, SONOFA-----!!"  As Mom always complained, people tend to hear such things and say knowingly, "Well, she had to have picked that up SOMEPLACE."  (Actually, I picked it up from the babysitter.)  You did the best that lay within you, Mom, and it's not your fault you failed; I was born loving to swear.

Considering all the aforesaid, I fully expect my daughter to employ what Michael likes to call "the full force of the English language" as she gets older, but I do try to monitor my own speech in front of her right now.  She's in the toddler parrot stage, and she has no idea that some words are more alarming than others, nor that there are inappropriate times and places.  She has repeated an occasional "Damn!" that she heard from me, I'm afraid, but so far, she has then quickly deleted the information, thank God.  I'm hoping to be able to wait to have the "When & How to Swear" conversation until she's at least 3 & 1/2!

But, my little Brigid has always been a precocious child.  She's just 2.25 years old, and already she can consistently count to 15, and knows every one of her capital letters on sight.  We're currently working on learning the lower-case alphabet.  Surely that's a feat of which any mother would be proud.  (Let me pause very briefly to give credit where it's due; Brigid's breadth of knowledge is almost entirely thanks to watching Sesame Street with me and discussing what was on the screen.)  And one of her favorite pastimes currently is her set of magnetic plastic letters, which spend far more time on the floor, in her mouth, or under the couch than they do on the fridge.

A couple of days ago, I was having fun eavesdropping on Brigid's play time while she moved her letters from the floor to the fridge for a change.  As she did so, she called out the name of each one, happily displaying her familiarity with the magic squiggles.  "T," she announced.  "W."  Pause.  "F," as I smiled to myself at my baby's abilities.  "U."  Wait.  What?  "C."  Oh, surely she's not actually going to--"K."  Yep, she did.  Totally unprompted, Brigid managed to spell her first expletive.  And since anything worth doing is worthy of overkill, she cut straight to the heavy amunition.  Mommy's so proud.  Brigid is living proof that you really can have just enough knowledge to be dangerous.
at 2:19 PM