Abandon Hope! Unless It Works, Of Course... 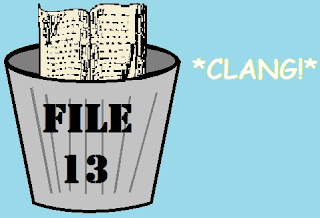 Oh, it's been a big day for me.  I sent out not one, but two pieces of writing to publishers for consideration.  However, that's not quite as drastic progress as it sounds (yet), so let me explain.

First of all, have you ever heard of ViewsHound?  Yeah, neither had I until they suddenly appeared on my Facebook sidebar, probably because I started blogging and most bloggers are secretly--or quite openly, in my case--hoping to be published someday.  So, here's the synoptic explanation that ViewsHound gives about itself.

"ViewsHound is built on contributions from great authors just like you.
Every day we give away a prize fund of $120 US Dollars.
Whether your article wins a prize or not, ViewsHound is a great way to get your message out to the world. Use ViewsHound to gain readers for your articles, as ViewsHound allows you to link back to your own site. Also, get visibility for yourself, and to establish a track record as a writer and an expert."

In other words, this isn't exactly the top of the publishing industry heap, but I did some research, and it's legitimate, so what have I got to lose by submitting an article?  Which I did today.  Moreover, they're specifically looking for articles about religion.  Surely I need not outline in detail why this gig fits me like a glove.  Now we just have to sit back and see if they think my writing is any good.  Fingers crossed, everybody!

The second submission today, however, was for a project in which I am much more emotionally invested.  If you glance through the previous posts (see "Veni-Vedi-Vici"), you will find that shortly after my father's death, I wrote a book that was about a lot of things, but primarily about my conversion to Eastern Orthodox Christianity, and my father.  Since then, I have sent the manuscript out a couple of times, but have not yet found a publisher for it.  So, today, I screwed up all the courage I could muster, and sent an inquiry letter to perhaps the best-known Orthodox publisher in the US, Conciliar Press.

For those of you who have never been through this process before, let me make clear that I don't have a book deal or anything yet.  Far from it, in fact.  Though some publishers let you just send in a manuscript and then they mail you a decision letter of some sort, many now require a few intermediate steps, because they'd never get anything done except swimming through unwanted manuscripts if they didn't.  Conciliar Press requires an e-mail letter of inquiry first, in which I outlined what the book's about, why I think it would be a good fit for their publishing mission in particular, and what qualifications I have to write for their intended audience.  Based on this, they decide whether they think the book is worth looking at or not.  If they think it's worth a glance, they'll ask me to send them a few sample chapters and an actual proposal, in which we get down to the nitty-gritty of how I would help publicize the thing if they publish it, stuff like that.  Only after all that, if they are satisfied that I'm not a crackpot trying to get my lunatic manifesto out to an unsuspecting public, and that I really can put together readable sentences, will they let me send them the manuscript so they can finally read the whole book and decide if they want to publish it.  In other words, this is a long, tedious, nerve-wracking, gut-wrenching, often heart-breaking process.  Aren't you glad you're along for the ride?

Seriously, I'm just excited that I worked up the courage to start sending stuff out again.  Hopefully, I'll have good news for you soon from one source or another.  All prayers appreciated!
at 2:51 AM