The Doorknob of Doom

The Further Adventures of Brigid the SuperToddler! 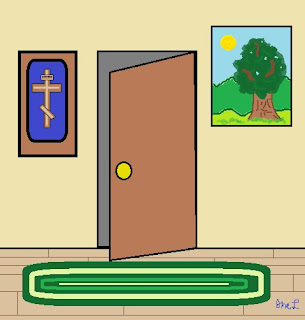 When we last saw our giggling hero, she was blissfully pushing my broom around the house, refusing to relinquish it on pain of splitting parental eardrums.  There have been further developments.  Thus far, Brigid has only stumbled upon being able to open doors around the house a few times, partly by sheer luck.  She continues to perfect her technique, but this week, she found a powerful motivation to perservere.  She saw where I put the broom away when she finally got bored with it.  So, I was in the bathroom the other day, when I could have sworn I heard the hall broom closet open, but since Michael was home, as well, I thought, "Surely that's just him getting something."  Wrong again.  I discovered a few minutes later that Brigid had quietly opened the door herself, retrieved the broom, and was now zipping around the house with it.  She was getting a little frustrated, though, because it's unwieldy at her height, so I ordered her a toy broom on Amazon that's just her size.  Far be it from me to discourage cleaning and helpfulness generally.  I am less enthusiastic about her new-found skills with doorknobs, however; from now on, no parental hiding place for annoying toys, contraband and Christmas presents will be safe.  Oh, dear.  *Sigh*

In other news, Brigid managed to scare the Hell out of me and herself the other day, when she got an urge to go spelunking.  For some reason, my child has an extraordinary skill that is amazing to watch, completely unhelpful and generally a pain in the parental ass.  No matter where she stands in the living room, she can manage to propel any toy she owns through the air and straight under the couch every time with perfect accuracy.  She then proceeds to set up a plaintive cry of, "Uh-oh!  What happened?  Where did it go?  Help!  Help!"  (I promise, that's a direct quote; I hear it often.)  Hoping to encourage independence AND save my sanity--not to mention my knees--I've been allowing her to fetch the items she can reach herself, after which I step in with my marginally longer arms, and if all else fails, I move the furniture.  But, determined to retrieve something and ever the problem-solver, Brigid realized earlier this week that if she turned her head sideways, she could squeeze her entire upper body under the couch, and thus extend her reach. 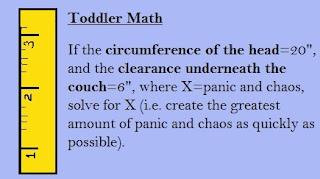 All went swimmingly until she tried to emerge, at which point it never occured to her that she would have to angle her head again.  The blood-curdling screams were enough to launch me bodily toward her, picturing in my head the adrenaline-fueled parental heroics we've all read about and prepared to lift the couch with one hand and grab her by her feet with the other.  Intelligent child that she is, however, Brigid resolved the issue herself and remembered that she needed to turn her head just as I got to her--no injuries, no problems.  Really wish she had remembered just a few seconds sooner; she frightened at least a year or two off my life.
at 11:34 PM