"The Coming of the Third Reich"

The next block of reviews from the backlog files represents a reading project that took up most of my spring this year, and captivated my brain the way few things have in quite a while.  It was certainly gruesome reading at times, and a warning from history par excellence, but as so many historians of sheer human lunacy have discovered, it has a terrifying, mezmerizing quality of its own, the account of a mass hysteria something like that which I imagine gripped the noose-wielding citizens of Salem, Massachusetts, who were victims as well, whether they realized it or not. 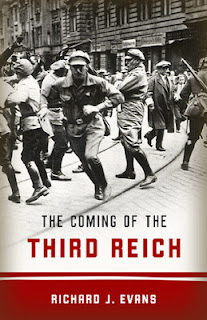 The Coming of the Third Reich
by Richard J. Evans

This book possesses all the eerie, morbid fascination of a car crash that you can see coming from where you're sitting in your own car across the intersection, and since you know that there's nothing you can do to prevent it, you indulge your curiosity, telling yourself that you're doing so in order to give the police an accurate witness statement when they arrive.  Though you know full well what the outcome will be, you still experience the adrenaline rush and suspense of reading a thriller, or at least, I did.

Since my very first viewing of The Sound of Music at the age of about 10 (before which I'd been completely ignorant of Nazism), I have wondered where on earth this insane movement came from, and exactly what kind of occult powers it was able to exercise that allowed Hitler to surge into power, while the entire world stood by dumbfounded.  I was also curious to learn how Adolf Hitler cooked up his psychotic ideas about the Jews.  This is the book on the subject that I was waiting to read.

How disappointingly mundane the facts of the Nazi rise to power proved to be.  No magic--just Hitler and Goebbels discovering how to herd people's mental processes around like so many unruly cattle.  In early 20th-century Germany, and much of Europe generally, Hitler's antisemitism was unusual only in its level of vitriol.  Basically, the whole world just really was that gullible, and Hitler really was that bitter because no one had ever decided he was a genius and given him a glittering career as an artist.  How pathetic.

Evans' account of the miserable tale, however, is masterfully written, and I can highly recommend it to anyone who is interested in this time period or just well-crafted histories.  Before you dive in, however, be aware (and the author points this out in the foreword) that this volume covers only the period up to Hitler's election as chancellor of Germany; this is a trilogy, each section of which can stand on its own, in my opinion, if you're only interested in reading about one specific period of Nazi history.  However, I recommend the whole experience, especially if you're fairly new to certain portions of it, as I was.  Chilling, but very eye-opening.
at 2:17 AM