With a Little Help From My Friends, or The Giraffe Thing

As I'm having a flare-up this week--complete with trip to ER last night--there seems no more appropriate time to introduce all of my faithful readers to a dear new friend of mine.  First, however, you'll need a bit of backstory. *special, fade-ish effects on the screen as we step back into my childhood* 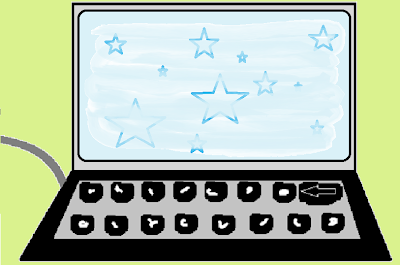 When I was a baby, the first toy I ever received was a stuffed giraffe.  Considering that he was made in the 1970's, he was actually quite a realistic looking giraffe, and I loved him dearly.  He remained a good friend and companion long enough for me to name him when I began to speak--I called him Gerri-raffe.  Obviously, I was just trying to say the word "giraffe" and wasn't yet able to accomplish it at 2, but the name stuck, and to this day, I still have my Gerri-raffe.  (Unfortunately, he's in a box packed away right now, and I'm in no condition to fetch him out to take a picture for you, but you know the kind of thing--yellowish, long neck, brown spots, weird fuzzy protrusions on the top of the head.)

Flash forward to last week, and the SuperToddler and I were shopping in Barnes and Noble.  Well, I say shopping, but actually, she was busily playing with their model train display while I enjoyed the chance to sit down in a spot where I could keep a direct eye on her while playing Yatzee on my iPod. 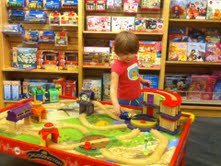 All of a sudden, my eye fell upon the most adorable little giraffe I've ever seen (although to be fair, she looks far less like a REAL giraffe than my old friend Gerri-raffe does).  I had noticed the display of My Blue Nose Friends many times, and always thought they were very sweet, but on this day, it just struck me that I needed this little giraffe in my life.  I had a feeling that a flare-up was slowly building, and I thought to myself, "When I'm having to spend the day drugged and wallowed down into my recliner under my blanket, she will make a perfect little comfort animal for me."  And she does. 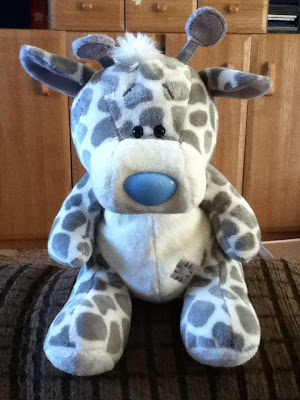 Don't you just LOVE her little patches?  And it's very fitting that she has one right on her tummy.  It was those patches that really made me decide I had to have a Blue Nose Friend, because they all have them, and naturally, when I discovered there was a giraffe, she was the one I picked.  Like me, she's not all brand-new-shiny-show-room-perfect; she's seen some hard knocks in her life, been patched and repaired (or at least, she was made to look like it), and I thought, "How fitting!  We may not be as young or as healthy as we once were, little giraffe, but we can hang in there together, can't we?"  Her tag says that her name is Twiggy, which I immediately tried to deny because it reminds me of the stick-figure modeling star of the 1960's who went by that name.  Too late!  As soon as I saw it on the tag, the name stuck in my brain as an adorable handle for a sweet little stuffed giraffe, and so she is Twiggy, and ever more shall be.  I periodically have to remind the SuperToddler that the "sweet little giraffe" belongs to Mommy, and may only be played with in very short, careful turns, but other than that, Twiggy has settled very quickly and comfortably into our home.  As I said, she didn't arrive any too soon.
at 5:00 PM

Email ThisBlogThis!Share to TwitterShare to FacebookShare to Pinterest
Labels: Adventures of Brigid the SuperToddler, Spoonie