Here's a little piece of my original artwork for you. I call it, This is My Brain on Despair. 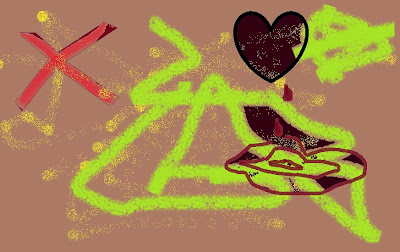 Saturday night, my roommate and I returned once again to the famous Lakewood Grill, and though it was far more crowded this week, we were having a lovely time, when I randomly decided to check my phone. Life lesson #107: Never, ever check your phone in a bar when you're having a nice time. I found a text message waiting for me from my ex-mother-in-law; my sweet SuperPreschooler is staying with her grandparents while I continue trying to find a home and financial stability for the two of us. This text message announced to me, 24 hours after the event occurred, that my daughter had to be taken to an emergency clinic with croup, receive a nebulizer treatment and two steroid shots, all without my presence or even my knowledge, and that the COST of this outing had been exorbitant. No apology for not calling me. For well over the 1000th time in my life, I wished I had died on the operating table nearly a year ago. My little girl had needed me, and there was fuck all I could do about it. I hadn't even known.

Tonight, I was in Wal-Mart, buying some groceries with my food stamp card, and praying that the $7 in my pocket would be enough to purchase the non-food items. The government will allow me to buy $100 worth of candy bars if I want, but won't let me use food stamps to buy toilet paper, some plastic forks, and a $.94 bottle of painkiller to nurse myself through a toothache. When the clerk rang up the final tally, I counted out the coins in my wallet with growing trepidation, discovered there weren't enough, and simply announced, "Shit."

I had just reached for the plastic forks to have them taken off the bill, when a complete stranger stepped out of the crowd and said, "How much are you short?"

I looked up with some amazement. The man standing before me in ragged clothes looked like he was in worse shape than I was! I answered honestly, "About a quarter," and he fished the coin out of his pocket and handed it to me. All I could say was, "Thank you, man! God bless you!"

He replied with some irony in his tone, "God bless you, too! I been there. This ain't my first rodeo."


My eyes welled up, and by the time I was almost out the front door, I was sobbing. I just stopped in an alcove near the entryway, and let some of the tears fall, so I could pull myself together enough to exit the store. A lady walked up and hugged me; I had my glasses off, and never actually saw her, so I would never know her if I saw her on the street. A college-aged boy asked if he could help me, and I answered in the negative, but still thanked him profusely. My tears were in gratitude to God that He has not abandoned me, that He can still inspire a stranger to kindness. However, they were also a very LOUD reminder to Him that the clock is ticking on both my sanity, and my survival...
at 6:29 PM