A Beloved Father and Pastor, and His Lesbian Daughter

Religion, science, and politics are currently tangled in a very messy dance over whether or not a person chooses to be gay, and what repercussions the issue should be allowed to have on our broader society. I think we all know the American conservative Christian position on the point, so let's not belabor it. That's a discussion for another time. Nor do I wish to discuss the current political wranglings. You can hear that argument anywhere.

I am interested in the best current scientific wisdom about when and how I "became" gay. Based on research surrounding twins, heredity, reported sexual attractions, and a host of other factors, the current understanding goes like this.

This is an X-chromosome. I really don't know how that actually works, either, so let's assume we're all in this together. We know that XX means a mother's having a girl, and that XY means she's having a boy. If you look very closely at the photo, you'll see that wrapped up inside that chromosome is human DNA, and of course, that spiral is made up of individual genes, lots and lots of them. Apparently, genes have even smaller units attached to them, called epigenomes, that tell the gene how to behave, and they change and even get turned off as we mature. In the womb, male fetuses have an epigenome that ensures their sexual characteristics and preferences won't get changed by the fact that their mother is female, and vice-versa for female fetuses. Those epigenomes usually turn off once their carrier is born, but if they don't, then a father passes his masculine sexual characteristics to a daughter when he fertilizes her mother's egg. And just that fast, a new little lesbian is made. If a mother's epigenomes keep working after they're no longer needed for her, they'll pass in her egg right along to help shape a gay baby boy. 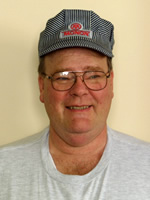 Dad was 6'2" and some 300 lbs of utterly heterosexual male, with all the attendant frustrations for Mom about issues like house-cleaning and drinking milk straight from the jug. I've never met a more self-secure man; he sometimes wore pink dress shirts while delivering his fiery sermons in church. When surrounded by a houseful of menstruating wife and daughter, he went calmly to the store and bought maxi-pads, totally unfazed by it. My father believed that homosexuality was a perversion of God's design for human sex, but he was in no way a homophobe, never fearing for a moment that his attraction to women could be rattled in the slightest. Are we in any way surprised that this man's DNA was powerful enough to alter my personality?

My mother also had issues with ME on matters like drinking milk out the jug, and never being able to clean a room to her satisfaction. I loved my mother so dearly, but I adored and emulated my father in every way I could practically achieve; very frequently, I considered him my primary model for mannerisms, a habit that frequently got me in trouble. For example, I had to learn to wipe my sweaty face with the collar of  my t-shirt, rather than the tail that my father used, so as not to flash the crowd. I wanted to make my mother happy, but I wanted to BE my father when I grew up. I'm proud to be my daddy's little lesbian girl, even though I know he would have been uncomfortable with such a statement.

Last week saw my partner, Kristina, and I pass the one-year mark in our relationship. She's a maddening joy and new-found wellspring of hope, constantly challenging me to become more the person I wish to be. My father (who died in 2007) made it clear he was proud that I was so much like him, but the one thing I earnestly wish we could have shared was the wonders and frustrations of loving a good woman. I wish I could call him and ask how he made my mother smile so genuinely for decades, that I could have questioned him while there was still time about how to help a woman's love for me endure like that.
at 3:46 PM