In my last post, I listed several new diagnoses for myself, and it seemed to spark similar questions for more than one reader, questions like, "Do you do anything but seek out labels for your issues? Isn't the actual diagnosis for one who constantly searches for diagnoses 'hypochondriac'? Does any of this then accomplish anything?" Today, I would like to address the ways in which my previous breakthrough has nothing but practical applications. 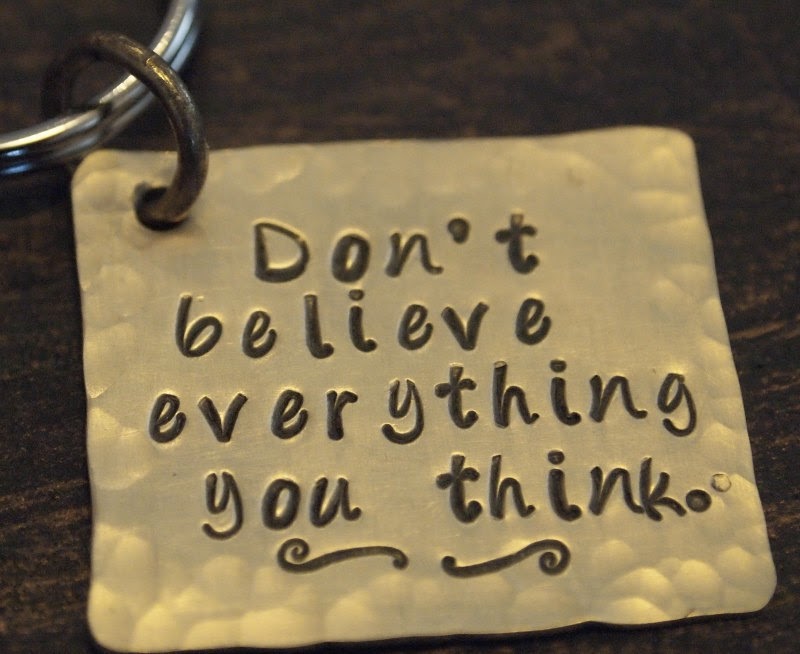 Panic and anxiety sufferers like me are masters at a thought process called "catastrophizing," i.e. some little thing happens, and my mind has already built it up into the worst case scenario possible, then declared that outcome a certainty. Psychiatrists often refer to this pattern as "automatic thoughts," but the term is misleading at first. The thoughts to which they're referring did not spring to life from nothing, fully formed, to torment their patients. These patterns are built up year after very painful year, the patient teaching herself to panic first and think rationally later, if at all. However, once the habit is established, it is automatic; it happens before I'm even aware that it's happening, and therefore I have no chance to challenge it and calm myself down. I had to become aware before I could begin to change the mental behavior, and the resulting actions I take in response.

If someone says to you, "What's 2+2?", odds are pretty good that your answer is automatically "4". You don't stop to ponder, you just spit it out, and never question whether the mental path you took to arrive at that answer was accurate. But you weren't born knowing that answer; some diligent teacher drilled it into your head, or else you were just extraordinarily advanced and taught yourself. Either way, at the age of 6, you probably had to consider to come up with an answer. Equally, I'll ask you, "What is 3x4?", and you'll likely give me a quick and accurate response, but you wouldn't have when you were small, and still had no concept of multiplication. We function in adult society by using automatic thoughts all the time. Our thoughts automatically warn us that if a moving vehicle in front of us in traffic stops, and we don't, there will be a wreck, so we slam on the breaks. We don't have time to debate the point; we have to stop immediately, so our brain processes it all for us and gives us the answer. Now imagine if that function goes haywire on you. 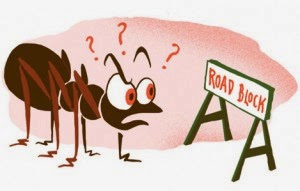 My discussion last time of the progression from being afraid of going to hell, to being afraid of God, to being afraid of any authority figure, to being afraid that any mistake can destroy my life, is an elaborate word-diagram of what now happens instantaneously in my head all the time. Someone says to me, "You need to go to a place to which you've never been before to fill out this paperwork," and right on the spot, I picture myself lost, roaming the streets of Minneapolis for hours, or reaching the office, but making a mistake on the papers that will somehow not only defeat my purpose, but land me in jail through some horrible misunderstanding. I'm not exaggerating. Every time I leave the house to do something I've never done before, that's a major triumph for me. After a lifetime of loved ones dying, people kicking my parents out as their pastor or fears that they might do so because of some mistake I made as the preacher's kid, living through a flood, my parents' bankruptcy and my own, I am accustomed to life going wrong, often without warning. My mind has me in a fictional account of the world crashing around my ears before I have time to draw breath.

I'm on Medicaid as my only form of health insurance. Last week, I made a mistake and didn't inform a health care provider that I was going to have to miss an appointment. Several days later, I was notified that because the mistake was mine, the office was still going to charge for the appointment, and I would have to pay it myself. What are your first thoughts? Perhaps something like, "Well, that's unfortunate and a bit foolish, but mistakes happen. You learned an expensive lesson, I suppose! Won't let one slip past you like that again." Indeed.

"Oh, my God! They'll probably take my Medicaid away over a screw-up like this! Why am I ALWAYS screwing up?! Even when I try to do everything properly and as they tell me to do it, I always manage to make a mess of it. What's wrong with me? What's wrong with the world, that there are always more requirements than I can ever seem to fulfill? I've never been able to keep up under the everyday pressures like all the normal people do, and I never will."

Maybe, like my partner, Kristina, you know me, and think to yourself, "But you look confident most of the time. I mean, you got all those degrees! Traveled the world! A lot of the time, it just looks like you don't want to do something, so you don't." Maybe. But now you know what it sounds like in my mind. I'm often terrified.

Awareness: The Only Cure 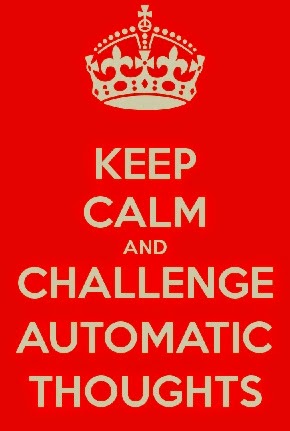 After so many years of believing such horrible things about myself, about the world and its perceived dangers, the only way I'll ever change these patterns is to first become aware of them. Like your brain when it tells you not to hit the car in front of you, mine tells me not to leave the house, not to take risks of any kind, not to try things unless I absolutely know I'm good at them, even things I think would be fun, and for years, I didn't question its pronouncements. I don't particularly want to work most minimum-wage jobs, that's true, but I really do want to meet new people, try new restaurants, visit stores and museums, and I often don't do those things for the same reason that I don't currently try to work. The same fear drives all that avoidance--the technical term for when a patient goes to great lengths not to do things that terrify them--and until I knew that, I couldn't counteract it.

Now that I know what automatic gymnastics my mind is performing, I can say to it, calmly and internally, "That simply isn't true. You won't go to hell if you go to church and God notices you're gay; that assumes He didn't know before, and trust me, He knew a lot longer than you did. No, you won't lose your medical coverage over one mistake; you'll just have to pay the doctor's office a small monthly payment until that debt is cleared. No, not every mistake could cost you any job that you do land. When the moment comes, you'll admit your mistake, and carry on with your work day."

So, I'm all fixed now, right? There should be news of a job within the next few weeks! No, it's not quite that simple. I spent 37 years building up these mental pathways for my automatic negative thoughts; it will be, according to my therapist, at least a few more months before I have enough practice under my belt with automatic POSITIVE thoughts that I will no longer burst into tears in the middle of the bank if my boss is frustrated with me, as I once did when I was 18 and made a mistake at work. Still, after last week's revelation, I filed my own taxes correctly, tried two new restaurants with my partner, met one of her friends from work for the first time, and have started writing again. I don't do self-analysis as a hobby; I do it to begin to rebuild my life.
at 3:42 PM