And an Afghan in a Pear Tree 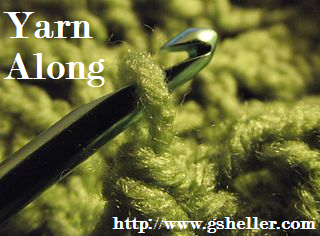 Yes, friends, the now famous "Christmas blanket" appears on Yarn Along for one last week.  I had hoped to have it done before I posted this week, but I've still got a few rows of edging to apply, not to mention the seemingly never-ending task of weaving in the ends once the project is "finished".  Is there a knitter or crocheter anywhere on Earth who actually ENJOYS that process?

So, the blanket is finally all but finished, and I will next turn my attention back to the nascent scarf that will be my first completed knitting project if I ever manage to finish it.  I really like the beginning I've made on it, so hopefully it will go fairly quickly, especially as I'm developing that stitching rhythm that we must each eventually acquire in order to succeed at any handiwork endeavor.  Obviously, I will be bringing you the latest updates on events as they occur. 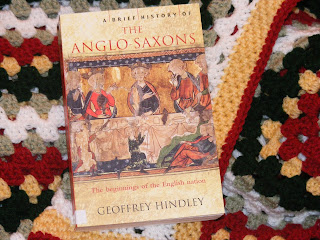 Finally, as to my current reading life, have you ever reached a point at which you've officially lost count of how many books you're simultaneously reading?  That's where I am currently.  Believe it or not, the book in my picture for this week is something I grabbed off my shelves "for a bit of light reading"--Hermione Granger is my hero!--in the midst of also working on a book about an ancient Greek explorer named Pytheas, Jane Austen's Mansfield Park, and Harry Potter and the Half-Blood Prince.  (There's pretty much never a time when I'm not re-reading some volume of the Harry Potter series.  Once AGAIN I say, Goodreads, you need a re-read function!!)  After a lifetime spent as a student, I seem incapable of being content unless I'm trying to read more books at once than any one person can balance.  I know; I'm strange.  But at least I'm happy!
at 1:51 AM