The Further Adventures of Brigid the SuperToddler 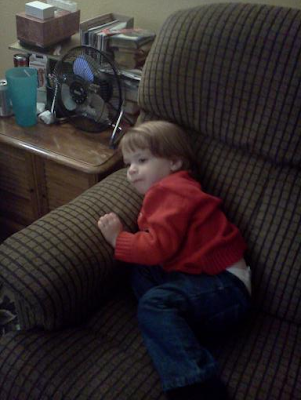 You know, I figure if I tell you about nothing but my brilliant and adorable child all the time, you'll get bored pretty quickly, so I try not to make Brigid the focus of every post.

HOWEVER, that having been said, it occurs to me that I haven't given you all an updated, in-depth report on the SuperToddler's adventures in quite some time now, and since it's been very adventurous around here lately, there's no time like the present.


First, the I Know You Won't Believe This, But I'm Going To Tell You, Anyway story.  SuperToddler is 2.75 years old.  (Yes, she'll soon be a toddler no more, and then I'll have to concoct a whole new nifty handle for her.)  I swear to God, I think she's reading on the sly.  You see, my two-year-old already recognizes the entire alphabet on sight.  No, I don't coach her and then she parrots me.  I stand in another room, hear her calling out, "D. E. R. B. Y!" and walk in to find her looking at a board book about horses.  I'm not even kidding.  Today, she told me all day long to "lisTen" to her, with a very pronounced T.  I'll give you a moment.  *Jeopardy theme song* Aaaaaaand the penny drops.  HOW DOES SHE KNOW THERE'S A 'T' IN THAT WORD?!  Exactly.  I've been wracking my brain all day.  I can only advance the following theory.

On one of her favorite tv shows, Charlie & Lola (I've already turned her into a BBC addict!), there's an episode called, "I am completely listening and also hearing," and they flash the title of each episode up on the screen at the beginning.  To my knowledge, this is the ONLY place Brigid has ever seen the word written out, and there is no way to know there's a T in that word just from hearing it pronounced in either British or American English.  If anyone has a better theory, I'm totally open to hearing it, because it's starting to creep me out a little.

The big excitement of the past two weeks, though, has been the discovery of an ancient civilization that has been one of MY obsessions for years.  Apparently, there's an Egyptology gene, and we have it.  Backstory: I have a whole bunch of very intricate coloring books, meant to be colored by freakish grown ups like me that still enjoy a good coloring book, and published by companies like Dover and Bellerophon.  Before you even start, NO, these are NOT "adult" coloring books!  They're just really detailed designs, like knights in chain mail armor and Elizabethan English fashions.  Because of my obsession with all things ancient Egyptian, I have by far more coloring books about Egyptian costume, religion and daily life than I do about anything else.  My beloved SuperToddler loves to flip through these, though she knows that somehow they're special and she's not allowed to color in them like she does in her coloring books.  She has also entered the non-stop "What's that?" phase, and whenever I answer that question, she repeats what I say again and again until it sticks in her mind.  The script goes something like this:

The child now roams through the house, shouting, "EGYPTIANS!"  She comes to me while I'm on the computer doing something and says, "Get up! Egyptians!", which being interpreted means, "I want to get up onto your lap and look at pictures of ancient Egyptian art on Google Images like we did last time, and the time before that, and the time before that, and...".  I think the highly stylized lines and bold colors appeal to her. After all, they've held an almost mystical fascination over adults ever since Napoleon's men first rediscovered them in the 18th century, these images.  I've just never seen a 2-year-old so enamored with them before!


I swear to you, I am NOT making any of this up, and today, I got photographic evidence.  Remember when I reviewed the beautiful picture book by Demi called simply Tutankhamun?  Well, my daughter found that book, and is absolutely in love with it.


She sits and "reads" it over. And over.  AND OVER.  Occasionally she asks me, "What's that?" or "Who's that?", but for the most part she just flips through and looks at the pictures, sometimes calling out the names of things as she turns the pages.  She now says things like "FINKS!" (which means "sphinx"), and "STATUE!", excited and proud of herself with each new accomplishment.  The other day, she identified an image of King Tut's death mask on sight, as we were sifting through pics on Google.  I won't make prophecies about her having a brilliant career as an archaeologist ahead of her or anything, but I AM excited at the thought that I'll have a fellow enthusiast with whom to discuss it all someday!
at 3:39 AM

Email ThisBlogThis!Share to TwitterShare to FacebookShare to Pinterest
Labels: Adventures of Brigid the SuperToddler, BBC, Egyptology