Review of "The Dragons of Chiril"

Let me just say up front, I take my hat off to publisher Waterbrook Multnomah for truly meaning it when they say that they want only honest reviews in their Blogging for Books program.  Obviously, they gave me a free copy of this book.  When I told them the book was so bad I couldn't finish it, offered to pay the shipping to mail it back to them and just forget the whole thing, they insisted that I should post my review, anyway, because they value honesty in their reviewers.  Kudos to them all the way, and now, please don't think I'm being rude when I have to write one of the most scathing reviews you've ever read. 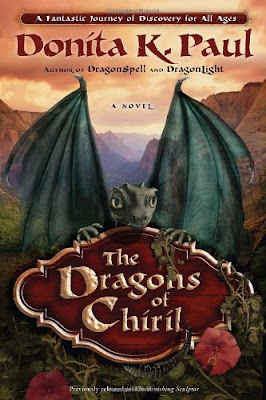 The Dragons of Chiril by Donita K. Paul is perhaps the worst book I have ever attempted to read in my life.  To lay out a few parameters, let me just say that I enjoy good fantasy fiction now and again; this just wasn't good fiction of any kind.  Also, I admit I was a bit suspicious of the idea of Evangelical Christian fantasy from the outset, not to mention annoyed that many Evangelicals who used to denounce Harry Potter as being of the devil have now gotten onto the fantasy bandwagon and seem to be trying to produce the Evangelical Harry Potter.  Thus far, they have failed astoundingly.  However, I decided I was letting my prejudices get the better of me, and when I saw this book available for review, I requested it, determined to give it a chance and stop prejudging things so harshly.  After all, I love C.S. Lewis, J.R.R. Tolkien, and Madeleine L'Engle, and they certainly wrote fantasy.  Unfortunately, the big difference is that they could all write.

I've never read anything else by this author, so this may be an early work, or not representative of her better abilities.  I must say that in all fairness.  Neither did I finish the book, so I will not be giving it my infamous Dorothy Parker Award, on the slim possibility that it got better at some point.  In all things, let us at least attempt to be fair.  Nevertheless, here is a succinct list of the shortcomings the book evinced in the 70-odd pages I managed to struggle through.

* It is incredibly derivative of better works.  There is a magic pathway between two different continents on the same planet; would you like to guess where that gateway is located?  If you said, "In a closet?", you would not only be correct, but would also be familiar with C.S. Lewis' Narnia, I'll wager.  Clearly, this author is.  There's also a brilliant but somewhat daft and occasionally absent-minded wizard--Dumbledore, anyone?

* Maybe it's just me, but I don't consider a fantasy novel the appropriate place to debate evolutionism vs. creationism, in part because I read fantasy to get away from the everyday, mundane, and ridiculously highly charged matters of life such as politics.  When the phrase "designed intelligently" actually appeared on the page, I knew I wasn't going to make it through this book.

* A little tip to would-be fantasy writers everywhere: If all of your place and character names are more than four syllables long, and one of them rhymes too closely with the word "macaroon," you're going to annoy your audience, or amuse them in ways that don't encourage them to keep reading.

* This was the only time in my life that I felt sorry for a character who was obviously meant to annoy me--namely, the heroine's mother--because she was trapped in the hands of an author who wrote her so very poorly.  Her irritating qualities went beyond even cliche and achieved simply absurd.

* The final straw for me was when the Dumbledore-like character and his faithful lackey started missionary work among the natives on the other side of the world.  There's a story that after reading some of Lewis' Narnia, J.R.R. Tolkien pointed out that he greatly disliked allegory.  I never really understood why, since some of the elements of Tolkien's own Middle Earth could be considered strongly allegorical (though he'd hate me for saying so), and I felt Lewis' allegory only added to the richness of his stories.  Now, I finally understand.  When done badly, religious allegory is so thinly veiled that even a lifelong Christian like me can feel like I've been mentally violated by someone else's religious agenda.  This isn't a novel; it's a sermon that makes John Bunyan's Pilgrim's Progress look subtle and oblique in conveying its message.

The publisher's representative asked me if there was any group of readers to whom I can honestly recommend the book.  Truthfully, I can say that if your primary criterion for enjoying a book is whether or not it holds unwaveringly to a specific set of religious values, regardless of plot or character development, and if you have not read the works from which the author so unsuccessfully borrowed, then you will probably like this book.  Otherwise, I strongly advise you to skip it.
at 1:32 AM