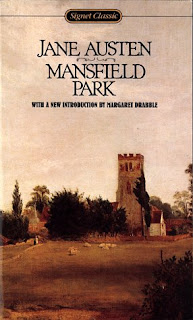 Yes!  I finally read this book, and now have only Northanger Abbey to go before I can officially say that I have read the entire Jane Austen "Sacred Six"!  It's funny, I've actually read a bit of her juvenalia, but still haven't finished the "canon" yet.  I'm quite surprised at myself about it, really.

You know, the more I read Jane Austen, the more I decide that she only crafted one plot, and kept writing it over and over, improving it each time, in each novel in which she used it.  The most amazing part of the whole enterprise is that she manages to keep me glued to the page EVERY TIME!

It's not actually the same plot, of course; it's a formula of re-arranging certain required elements into different patterns, and it is that very quality that allowed Austen to DEFINE the "comedy of manners".  Someone will behave in an absolutely infamous way when judged by the standards of the time.  At least one, and usually two people will be so impossibly stupid and annoying that the reader cringes every time that character appears on the page.  At least one main character is impossibly good, usually the heroine, though not always.  The one redeeming factor of this aspect is the fact that Austen uses it as a sort of quiet rebellion; though she never actually says so, she makes it clear to the audience that the snarls to happiness would have gotten untangled much quicker if that character hadn't been such a paragon of the virtues of Jane Austen's time.

So, it goes without saying that this book was that novel again, and that like all the others, this one had its own twist, its own take on the themes.  Nothing remains to give you but spoilers and my own opinion, and as I'm diametrically opposed to all spoilers, I'll just say that I enjoyed it, I always enjoy them, even though I'd sometimes be hard-pressed to outline exactly why.  Jane Austen was an absolute genius; what else is there to be said?
at 12:02 AM