And now I attempt the monumental task of catching up on my review back-log.  Wish me luck, everybody! 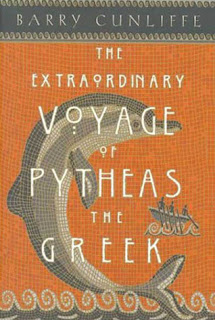 The Extraordinary Voyage of Pytheas the Greek
by Barry Cunliffe

Have you ever read a book that was interesting and actually quite dull simultaneously?!  Neither had I, until I read this one, and don't ask me how it managed such a thing, because I'm still puzzling over it.  I only know it's the case.

The story of this non-fiction work in a nutshell: in the mists of time B.C., a Greek scholar named Pytheas set off to explore the seas beyond his own Mediterranean, which was quite a daring project at a time when the entire world seemed to lay on the inner side of the Straits of Gibraltar.  He kept a record of his adventures, and from the best guesses of modern academics, he made it as far as Britain and maybe even Iceland.  The only draw back is that his own written account is no longer extant; we only know anything about Pytheas through quotes from other, later Greco-Roman authors.

This snag is where we hit the first rocky shoals of boredom.  If the original book were intact and available to us, scholars like Barry Cunliffe could do what scholars often do with texts like that--insult our intelligence a bit by assuming that we'll never read the original or wouldn't understand it if we did, but in the process create a shorter, more entertaining recap of the original that WOULD, after all, save us the bother of having to read it.  Since that's not possible here, however, what Cunliffe must do instead is craft a long-winded introduction to the world from which Pytheas came, the identities of the men who quoted him, and finally, what guesses we can make about where exactly he traveled and when, based on the clues contained in these second- and sometimes third-hand accounts.

The book manages to be interesting AND boring in that many of the individual facts are truly fascinating--for example, did you know that the "French" city of Marseilles was founded as an ancient Greek colony on the shores of what was then a very fractured landscape full of Frankish and other tribes?!  I certainly didn't--yet those interesting facts never coalesce into a solid, interesting BOOK.  It's a shame, really.  I wanted to enjoy this more than I did.  If you're really interested in some of the elements of the tale, like ancient Greek trade, the earliest existing accounts of ancient Britain, or tales of intrepid explorers from every era, then it's worth it to go ahead and wade through this one.  If not, I really suggest you stick to lighter fare.
at 11:36 PM