Well!  After finally wrestling the SuperToddler into bed at an indecent hour of the night, I can at last sit down at my computer and make this announcement. 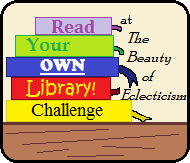 Welcome, both returnees and newcomers, to the second monthly installment of the Read Your Own Library!  Challenge.  First things first.  I cannot believe that I forgot to announce in last month's post WHICH LEVEL OF MY OWN CHALLENGE I was signing on for!  So let me rectify that right now.  The whole reason I started this challenge is because I needed to go into total BIBLIO REHAB, as I probably already own more books than I'll read in my lifetime.  And though I have bought books since the challenge first began, I was a good girl, fulfilled my own requirements, and read not one but two of the books I already owned in October before buying any more.  So, allow me now to bestow upon myself the badge for my chosen level of book recovery. 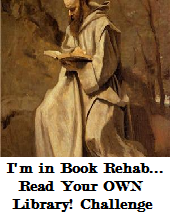 Now then, on to a review of the book to which I originally committed myself at the beginning of the challenge last month, Stuart Little.  Oh, dear.  After a lifetime of absolutely adoring Charlotte's Web by E.B. White, I found his tale of the bizarre mouse born to a family of humans very disappointing.  My apologies here and now to all those who love Stuart as much as I love Charlotte, but I REALLY disliked this book.

I don't mean to say that I hated everything about it.  It had some charming vignettes, like Stuart becoming the captain of a toy sailboat.  But it had no narrative arc, told no unified story, never explained how a human couple produced a mouse as their son, and had the least satisfying ending that I have read in years.  Moreover, there was at least one scene that made me want to slap Stuart outright (it was during his first real date, for those who are curious to know to which scene I'm referring).  Sorry, but overall, I prefer Beverly Cleary's Ralph Mouse and his motorcycle to Stuart Little's ridiculously invisible toy car any day.

Moving boldly on to November, I realized when I finished Stuart Little in less than a week that I had gone a little too easy on myself for the first month of the challenge, so I'm setting my sights a little higher this month.  The target book is by Barbara Mertz, aka Elizabeth Peters, author of the Amelia Peabody mysteries.  Some of you may not be aware that Barbara Mertz is actually a fully-fledged Egyptologist, and has written two major works on the history of the ancient Egyptian people.  I read her classic Temples, Tombs and Hieroglyphs several years ago, which is all about the pharaohs and monuments, all the famous stuff.  I then tried to dive straight into Red Land, Black Land, which is her ode to the common people of ancient Egypt who never get as much air time, but coming right on the heels of each other, the two books led to Egyptology fatigue, and so Red Land, Black Land beat me at the time.  I think we all know what that means--when I finish the book for this challenge, it will be my first seed planted in my Victory Garden!  And THAT will feel really good, like a true accomplishment.

So, for those returning to the challenge, did you finish the goal you set yourself last month?  Give us a post telling us all about it.  I'll be sure to e-mail you the code for the lovely badge you've earned yourself!  And to our newbies, welcome!  Tell us how you got into your current state of backlog, and what you plan to read this month.  We're all anxious to cheer you on.
at 11:45 PM