Hello, loyal followers!  The more eagle-eyed among you may have noticed that my blog has recently begun sporting a new badge of honor--a House banner which proudly declares that I have been "Pottermore sorted" into Hufflepuff.  (Those badges, by-the-way, are available here.  God bless the lovely people who created them.)  And those of you who just REALLY have too much time on your hands, and also have photographic memories, may be asking yourselves (and me), "Wait! Didn't she say a few months ago that she had been officially sorted by Pottermore into RAVENCLAW? Somebody's playing fast and loose with their facts here!"

Well, in point of fact, I've been sorted twice, you see.  "Cheater!" you now cry in righteous indignation.  "You have TWO accounts, while I'm still waiting to get the confirmation e-mail for my FIRST ONE?!"  A very understandable reaction, but I swear I haven't just been gathering extra Pottermore identities for shits and giggles.  No, I was sorted into Ravenclaw during the Beta (i.e. trial) period of the site's existence, but now that they have opened up to everyone, I had to go through the sorting again, like everybody else, and the Sorting Hat apparently found different stuff in my brain this time.  Considering the adventures I've lived through in the past few months, I can't say that I'm too surprised. 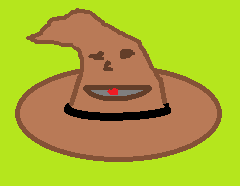 For ten house points, can anyone recite for us Rowena Ravenclaw's famous motto?  Very good, Miss Granger!  Indeed, "Wit beyond measure is man's greatest treasure."  And once upon a time, when I was garnering Master's degrees as if they were wild flowers waiting to be plucked in a field, and dreaming lofty dreams about proceeding straight on to a Ph.D., I think I actually believed that.  Now, don't anyone panic; I haven't had a complete personality transplant.  Still reading 950-page non-fiction books for fun, still teaching my daughter the names of ancient Egyptian deities as fast as her interest permits, still a Geek, die-hard and proud.  But I also suffer from Post-Traumatic Stress Disorder (PTSD), and one of its effects is that it plays havoc with your thoughts.  Lack of concentration, loss of interest in research or writing projects that once enthralled you (or anything else, for that matter, except playing video games until 4:00 a.m. to avoid the nightmares you know are coming as soon as your head hits the pillow)--these are all classic symptoms, as are the famous flashbacks, of course, my first of which I finally experienced last week.  Hell-a not fun, by-the-by.  In other words, your "wit" can easily be knocked off-center by this disorder.  You don't get dumber or anything, you just find it more difficult to marshal the resources at your disposal.  Thank God it hasn't damaged my interest in reading, and I am devouring books as quickly as ever, even if I occasionally have to read a sentence several times in order to fully take it in.  My friend and comrade in arms in all this, Dorothy L. Sayers' famous detective creation, Lord Peter Wimsey, also suffers from PTSD (though in his day it was called "shell-shock"), and reading about him and his fellow WWI vets is a little like doing group therapy for me. 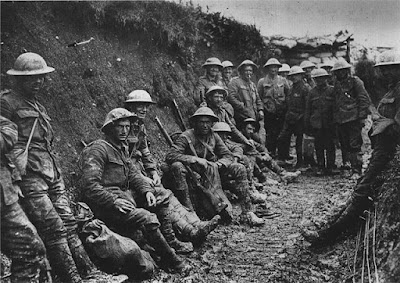 Naturally, this may have called another question to your mind: "Wait a minute? You've never been in the military, have you?  Besides everything else, your profile picture would seem to suggest that you...uh...don't have the physique for it."  And you're quite right.  However, PTSD is not just a problem for the poor men caught in the idiocy that was Trench Warfare, or the idiocy that was Vietnam, or the idiocy that IS Iraq and Afghanistan.  (By-the-way, does anyone see a pattern forming here?  Almost as if, 9 times out of 10, war is just a really stupid way for a government to abuse its own citizens by giving them PTSD and other irreparable injuries?  Sorry, slipped onto my soapbox for a minute.  *climbs ponderously down from soapbox*)

ANYWAY, victims of natural disasters, or long-term abuse, or terminal illnesses, or those who have seen loved ones suffer through prolonged terminal illness, all are prone to develop PTSD in the aftermath of those events.  There's been no abuse in my history, thank God, but as to the others...

Police knocked on our door in the middle of the night, informing my parents that the flash flood would soon reach our street.  My parents, in turn, woke me, we grabbed a few things and went up the enormous hill above to spend the next few hours with our neighbors in their trailer, because if the waters had reached them, we would have been watching for Noah shortly thereafter.  The waters did NOT reach that trailer, but we did watch people drive boats down Main Street the next day--or just hitch a ride on a passing refrigerator.

Besides this little life event, my parents tried as often as possible to die throughout my childhood--from pleurisy, from lupus, from heart attacks.  Of course, they actually tried NOT to die, but as Eric Idle of Monty Python fame has pointed out, "Life will get you in the end."  You may wonder why, if this shit started in my childhood, I'm only just now developing all these symptoms.  Well, I haven't, first of all; I've had them off and on for years, but they've finally reached a whole new plateau, I'm afraid.  Secondly, they've done so because it's called "POST-Traumatic Stress Disorder" for a reason.  Until the trauma ends, you don't fully develop the disorder, because your mind and body believe that you don't have time to do so--clearly, life-threatening things are happening around you.  Your body just keeps pouring on the adrenaline to get you through whatever the next crisis will be until the crises finally stop.  When you do that more or less on-going for twenty-some years, you've got one hell of a debt to pay to your poor body and mind when they finally figure out that the trauma is over.  My grandmother, presumably the last person I'll have to worry about for a LITTLE while, anyway, (PLEASE, JESUS!), died this past December.  Ladies and gentlemen, let the mental games begin.

IN OTHER WORDS, I've been having one hell of a time of it lately, gang!  I found a local counseling center at which I start therapy in two weeks *fingers crossed that these people know what they're doing*.  Last night, I actually got a break from the horrifying, heart-rending dreams that have left me dreading sleep.  Many nights, I sit up to obscene hours, watching BBC comedy on YouTube or playing on Pottermore, until exhaustion finally claims me and I find out for another day that I can't avoid the dreams by just not ever sleeping again.

On one of these marathon nights recently, I received word from Pottermore that my "real" account was ready, and I could come get sorted like everybody else.  This is done, of course, by answering personality-quiz type questions about yourself, and unless you're an idiot, you can tell which way the wind is blowing on these questions.  When it asks you things like, "Do you want to be thought of as ambitious?", little green signal flares ignite that spell out "Slytherin!", you know?  And while I was answering these questions, I reached a moment where I answered, trying to be truthful, that I wanted to be thought of as trust-worthy.  When I reached the end and discovered that I'd been bunged into Helga Hufflepuff's House, for one second, I was bitterly disappointed.  "NOOOOOOOOOOOOOOOOOOOOOOO!  I'm a Ravenclaw, dammit!  Everyone knows that!"  Then I calmed down, thought for a moment, and realized something: I no longer believe in Ravenclaw's motto.  Intelligence is very important to me, and education is very nearly ALL-important to me, but in my current situation, one thing matters more.  I don't need people to blind me with science, or show off their intelligence.  I need them to be kind to me.  Moreover, I want to be kind, as well, because there are a lot of people in this world who are just as broken as I am, and our only hope is to all be in this together.


Do I now think intelligent people are pretentious snobs?  Of course not, especially since judging people is wrong and judging people as a group is just a recipe for disaster.  Furthermore, I haven't suddenly become dumb; I've recently become...unwell.  I value my intelligence.  I'm just learning to value my humanity most.
at 4:04 PM