Review of "They Came to Baghdad" 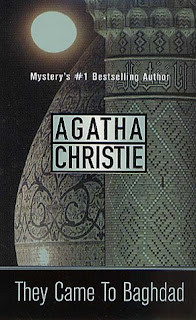 They Came to Baghdad
by Agatha Christie

Accustomed as I am to thinking of all of Agatha Christie's novels being set in the Gilded Age or the Roaring '20s, I was astonished at first to find out that this one takes place in the thoroughly war-weary Europe of 1951.  (Indeed, I had no idea until I read the blurb at the end that Agatha Christie and I only missed being in the world at the same time by one year.  Elvis and I only missed each other by TWO WEEKS, and I've always felt rather cheated about it, even though he does annoy me mightily.  Sorry--I digress.)

The basic idea here is that a large, disparate cast of characters--primarily, a rather silly young woman--find themselves entangled in international intrigues.  Although this is only the second Agatha Christie book I've ever read, I have to say that I don't think this one is typical Christie fare, so devoted fans might be disappointed in it.  It focuses so heavily on the evil, pointless futility of war that it almost turns into a sermon near the end.

That said, however, I have to admit that I liked this book, though I really didn't expect to at first, because the heroine got on my nerves.  I've never had much use for people who habitually lie just to liven up their everyday, hum-drum lives, and Victoria Jones is the queen of the recreational liars.  However, the author quickly taught me how useful that character "flaw" can be to a woman who accidentally finds herself embroiled in espionage!

I did manage to figure out who was "behind it all" before Victoria did, which is always my main criterion for whether or not I "succeeded" in reading a mystery novel, but I think I really should have figured it out even before I did.  This book was a fascinating glimpse into Agatha Christie's mind, into the view of the Cold War world.  I'd be interested in reading her diaries or letters from the time, to find out what she was thinking as she crafted the plot.  Either way, I enjoyed it, and at least the heroine didn't do many of the stupid things that so annoy me in a lot of other books.  She's bright and very quick at thinking on her feet, even if she isn't fond of veracity.
at 8:54 PM