Review of "On the Bright Side, I'm Now the Girlfriend of a Sex God" 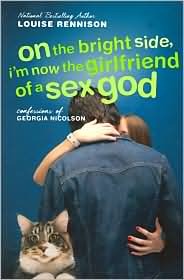 On the Bright Side, I'm Now the Girlfriend of a Sex God
by Louise Rennison

This entire series of books is absolute nonsense, and the only reason to read them is because they're hilarious and fun.  They're full of a whole bunch of total nothing, just the everyday sorts of things that can happen to poor, unsuspecting teenage girls as they go about their everyday lives, with the added joy of British English mixed in to complete my happiness.  Georgia, the main character, is obnoxious to her parents to a level that I could never stand even when I WAS a teenager, let alone now that I've become a parent, but I've known real kids who were even worse, so at least it's authentic.

HOWEVER, I didn't like this second installment nearly as well as I did the first, for the very reason that the strong points of the series faltered and the flaws got seriously magnified.  Quite improbable and unrealistic things started happening, and Georgia's bad attitude achieved new levels of annoyance.  Her parents set her such a bad example of behavior that I couldn't totally blame her, though, and before it was over I was pretty much tired of everybody but the cat and Georgia's baby sister, Libby, who is by far my favorite character in the entire series.

So, this one was kind of a dud.  But, I had to read it, anyway, so that I'd know what was going on in the next one, and because it was part of one of my reading challenges.  That somewhat disagreeable task over with, we can now move on to other things.
at 2:32 AM

Email ThisBlogThis!Share to TwitterShare to FacebookShare to Pinterest
Labels: 2.5 Stars, Reviews, YA