Review of "In the Garden of Beasts" 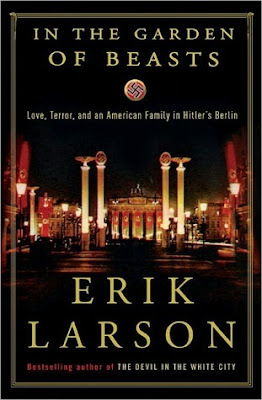 In the Garden of Beasts: Love, Terror, and an American Family in Hitler's Berlin
by Erik Larson

This book is the story of the poor man who got roped into taking on the job of U.S. ambassador to Germany during the early years of Hitler's regime, when the archlunatic was still just chancellor under the blundering and ineffectual presidency of the aged von Hindenburg.  It also spans the death of said president, along with the "Night of the Long Knives" and other horrifying events of Hitler's eventual rise to unquestioned power, during all of which, William E. Dodd held the most unenviable ambassadorial post available in American diplomacy.

The tale is told through the vehicle of the activities and reactions of the thoroughly human Dodd family, and believe it or not, it's truly a thriller in its own way.  Since we all know the unadulterated evil that is brewing in a way that none of the Dodds could have at that time, I read this book in much the same way that I watched Titanic, i.e. wanting to stand up and shout, "Oi! There's an iceberg coming!" the whole time.

The only really frustrating thing about Larson's style is that he--also aware of the momentous times in which the Dodds were living--constantly pulled the "but even WORSE was lurking just around the corner!!" stunt, trying to keep suspense at fever pitch, and pretty soon it just became rather corny.  I kept expecting to hear an invisible orchestra burst out playing dramatic notes: "Bump bump BUMMMMM!!!!"  So that got old quickly.

Otherwise, however, I actually was fascinated by this book, found it an exciting read, and was challenged to look into a few other books, especially the novels of Christopher Isherwood, and Richard J. Evans'  3-volume history of the Third Reich (on which, much more is soon forthcoming).
at 2:11 AM