In the early days after my father's massive heart attack, when he was still in the hospital in Louisville, Kentucky, he said to me, "That which I have most feared has come upon me," quoting the lament of a broken man from Job 3:25. Dad's father, Lebert, had died of his second heart attack two weeks before Christmas the year that my father was 16. I was 16 on that day when I was standing beside Dad in his hospital room. What we had both dreaded had begun, and would not end until 2007, after many long years of fear, suffering, and sadness.

SALEM JOHN BOARDS THE 'LAST TRAIN OUT'
a tribute to my dad written by Cecil J. Smith, emeritus editor-in-chief of my hometown's newspapers

Once again, what I have most feared in the past few months is about to descend on me. Barring an outbreak of Deus ex machina (the literary term for divine intervention on a game-changing scale), I will be moving into a homeless women's shelter on Monday, February 17, 2014. Now, don't misunderstand me--I believe in divine intervention to a point that makes this whole assertion an understatement. You cannot imagine the genuine miracles I have seen in my 36 years of life. This may be stopped at the eleventh hour, or it may be that the shelter will be best for me, anyway. I can only say at this moment that it appears to be looming fast before me, and I am thoroughly terrified.


The facts are simple. I have PTSD; I applied for a very small, part-time job yesterday, even though I know I'm not ready, because I have got to find some income. My ex-husband owes me some 9 months' worth of alimony, because that's how long he has also been unemployed, despite his continuing efforts to find a job. The car upon which I have depended to take me to medical and therapy appointments is sitting in a driveway, and will not start. A tooth with a gaping whole in it is slowly building up to a catastrophe in my mouth, and I have no way to get the root canal I need. I have applied for every form of government aid I can, and it will be another 6-8 weeks before I can even expect a rejection, let alone an award letter.

At times right now, I hate myself, and I hate my life. Being a mother under these circumstances is a cruel, jagged, double-edged sword; I feel such guilt at not being with my daughter now, having to leave her with her paternal grandparents, being unable to care for her, that I sometimes want to die, and because I would never leave her or hurt her, I could never, ever kill myself. I spoke to my sweet, beautiful, 4-year-old daughter on the phone today; she asked, "Are you my mom?" Never has Hamlet's soliloquy made more piercing sense to me. I know I am being viciously honest, but I have no pride left with which to hide the self that most people don't show to others. 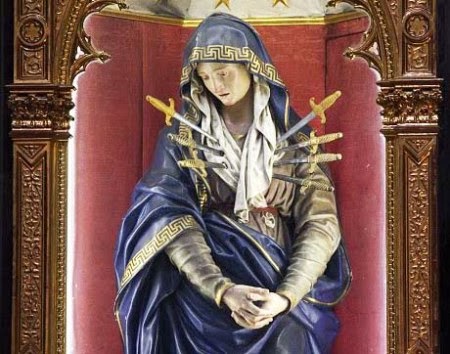 I say that, but the last vestiges of pride do linger to make me ashamed of my situation, embarrassed to admit that I am a pauper with PTSD, anxiety, depression, and panic issues, afraid that those I need most right now will reject me as a lost cause or a dangerous person with whom to become entangled. But yesterday, I found this, 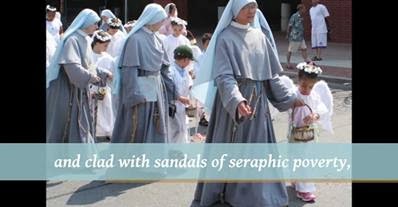 a video on YouTube of a performance by the Franciscan Sisters of the Immaculate (which I beg you, in your charity, to watch, as it will help the remaining sentences make more sense).

As the images unfolded, I was reminded that there is no shame in poverty for a Christian; our Founder said of Himself that He had "no place to lay his head" (Matthew 8:20). I certainly cannot compare myself to Him, nor claim, as He could, that I have not contributed in any way to my current predicament. All I can say is that He never turned anyone away for poverty, but "had compassion on them, because they were harassed and helpless, like sheep without a shepherd" (Matthew 9:36), and if He had turned people away because they had sinned, had helped cause their own sufferings, He would never have interacted with a single human being. Indeed, He would not have bothered to come at all.

My Muslim friends taught me to pray in these beautiful words (two common interpretations of a phrase from the first surah of the Qur'an):

My Master taught me to pray in very similar terms:

Lead us not into temptation, but deliver us from evil.