Time for a Hodge-Podge 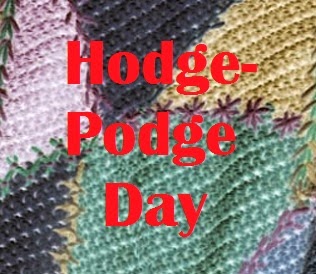 Yes, my faithful band of readers, another Hodge-Podge post is in order, as I have a few things about which to update you at the same time that are unconnected, except in the fact that they are all happening in my life. I admit this post is a long one, but I hope you will come with me for the whole adventure. As you will see shortly, the day I've had so far makes the title of this semi-regular feature particularly apt. But first, a writing update.

Ah, how those words roll trippingly off the tongue (or keyboard) of any aspiring author! The sense of pride, of accomplishment, increased self-worth, is boundless--for about 12 hours. Then the doubts set in. "These poems seem inexperienced. I sound childish and infantile! They're all too much alike, in both form and content. I KNOW that if they're combined into a single book, they should have a unifying theme, BUT..." and on and on it goes. So, I'm into the doubtful phase now, but ultimately, my opinion is no longer the one that matters; a publisher will accept it or not. My view of it is already set--I love my "little book" (nod to Louisa May Alcott, a heroine of mine), or I would not have bothered to keep going with it. I will always love it, for all the things it represents in my growth as a person and the memories it will always evoke for me. The only questions now are the subjective--Will anyone else be able to identify with my words and love them?--and the mundane--Will my efforts help me in the world of filthy lucre? I have no control over the answers to either, so I will simply send it out to see what, if anything, happens next.

Even for a woman who owns a blog called The Beauty of Eclecticism, I have had a particularly diverse day. It started--as journeys down rabbit holes so often do these days--with a link that a friend posted on Facebook. NPR conducted an interview with the prioress and choir-mistress of a group on nuns who have been taken on a whirlwind tour of secular popularity with their sacred music in the past few years. The Benedictines of Mary, Queen of Apostles, are a cloistered order, which means that they live their lives in community together but in near-total seclusion from the outside world. A common misconception about cloistered monastics is that they separate themselves from the rest of us because they fear we will contaminate them with our sinful ways. On the contrary, the best monastics gaze permanently and unflinchingly into the chasm of their own sinfulness, leaving no time to judge anyone else. They hide themselves away (as Christ instructed all of us to do during our prayer time) in order to devote as much time as they possibly can to praying for all of us, the entire rest of the world, as they know that not everyone can be cloistered, but we all need prayer, just the same. The sisters of Mary, Queen of Apostles, are dedicated to that mission.

The rise of the digiverse has been a God-send (if you'll pardon the pun) for secluded religious orders, because it allows them to have limited contact with the outside world on their own terms. They communicate with the rest of us through e-mail, websites, and in the case of orders such as this one, recordings of their beautiful liturgical music, which they also use to support and maintain their priory in Missouri. Videos about the sisters and their work, as well as other similar religious orders who produce music for the wider world, are available on YouTube, and if you are in need of a moment of heavenly peace right now, I cannot recommend strongly enough that you check them out.

From the sublime to the earthy we go. Somehow, my Facebook wanderings then led me to the home of fellow bloggers Amy and Kate, a mother-daughter pairing who have produced the enormously popular Homestead Revival. This blog chronicles the on-going journey of a family who chose the periodically fashionable path of "self-sustained living," "returning to the land," that sort of thing, and they are staunchly traditional Christians, talking frequently about homemaking and the Apostle Paul's injunction that wives should be submissive to their husbands. I think you'll agree that such a blog would not be my obvious choice of hang-out spot; I recently came out as a lesbian and divorced my husband, after leaving the ultra-conservative Eastern Orthodox church for the markedly liberal Episcopal Church.

That has been the theme of my day, what has made it eclectic and interesting--in short, a hodge-podge. I have been reminded that I don't have to agree with those I encounter to enjoy our common humanity, to learn from them and be spiritually nourished by their wisdom, and hopefully to be able to offer something in return in that exchange when given the opportunity. Moreover, I am officially an author with a manuscript soon to be under consideration by publishers; I have added to the sum total of artistic and emotional expression in human history. My life is little short of terrifying right now in a number of aspects, and these are interludes of peace at the center of my storms.
at 3:13 PM