Words Are My Friends 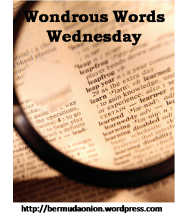 It's time again for one of the highlights of my week, the delightful vocabulary meme hosted by BermudaOnion. This week, my word discoveries come from an e-book I've been reading called Montfort: The Founder of Parliament, The Early Years. As the events upon which the novel--and its sequels--are based took place in the 13th century, this series will be a gold mine of new words, I'm sure.

(Unless otherwise indicated, I draw my definitions from Wiktionary, which I have found to be an invaluable resource since I started doing this meme.)

2. quintain--the author herself gave us a definition of this one later in the text: "a dummy mounted on a post with paddle arms outstretched." Wiktionary adds the following explanatory information: "a target to be tilted at in jousting, or otherwise used in target practice." If you've ever watched a film in which knights were training for a tournament, you've probably seen one of these; I had, but didn't know what they were called.

3. fibula--I'm sure we all know a definition for this word, as it is the name of one of the smaller bones in the human leg. However, it apparently has another definition, as well. "An ancient kind of brooch used to hold clothing together, similar in function to the modern safety pin."