A Blog (besides this one) is Born! 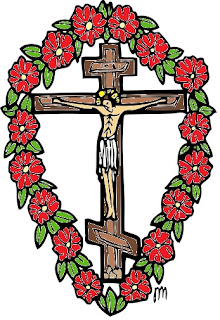 So, if you're new to the blog you're currently reading, right about now you're probably saying to yourself, "Wait.  What?  You started ANOTHER blog?  I didn't even realize you had THIS one until today, and it looks like it's still firmly in the fledgling stages!"  And of course, you would be right.  Just last week, I was cruising around, idly looking at strangers' blogs, noticing that some people had 5 or 6 each, and wondering to myself why anyone would do that.  Honestly, I still wonder; 2 blogs is plenty for me at the moment.  But the answer to why I opened blog #2, "Philothei of Salem," requires a little back-story.

When I recount the long line of Pentecostalism that makes up my gene pool, I feel a little like the Apostle Paul when he gave his pedigree of Jewishness in his letter to the Philippians.  My mother's family lived in Appalachian Kentucky for generations, and in the Kentucky "hollers," you have two options where religion is concerned: the mountain holiness brand of Christianity, or atheistic heathenism.  Most of my family chose to be holiness Pentecostals--you know, the women who wear their impossibly long hair up in a bun on top of their heads and wouldn't be caught dead putting on a pair of pants instead of a skirt.  One of my forebears, a great-great grandfather, I believe, was a circuit-riding preacher.  My father pastored small Pentecostal churches in several parts of rural Indiana until his fourth heart attack put an end to his preaching career.  I've sung, wept, shouted, spoken in tongues, attended tent revival meetings, and accompanied my parents on evangelistic crusades that took us to churches with outhouses instead of new-fangled indoor plumbing.

When I left my hometown of Salem, Indiana, to start college, I quickly met a much wider section of humanity than I had ever been exposed to before.  I hadn't even left my home state, and already I was making friends with Muslims, Hindus, atheists, Buddhists, and Christians of more varieties than I ever knew existed.  By the time I finished graduate school, I had traveled halfway around the world to teach English to native Russian speakers, and discovered a brand of Christianity that caught my attention and wouldn't let go--the Eastern Orthodox Church.  {For those completely unfamiliar with this church, go rent the movie My Big Fat Greek Wedding.  The main character is a member of the Greek Orthodox Church, which just means that her family are all Eastern Orthodox Christians from Greece.  She's Greek Orthodox; I'm American Orthodox.  Same church in different countries.  You get the idea.}

In 2004, I became an Eastern Orthodox Christian in a ceremony that would have truly baffled most of my family if they had worked up the courage to come.  Instead, they voted for accepting that I was still a Christian of some kind and leaving it at that; we were all happier that way.  The upshot of all this is that I have numerous different microcosms in my life for which I stand as the only connective tissue.  Most of my Orthodox friends have no clue what Hoosier Pentecostals are like.  Probably 95% of my Pentecostal family and friends had never heard of Orthodoxy until I suddenly decided to convert.  The Muslims who have graciously offered me their friendship over the years--whether as my peers or as my students--have little desire to discuss the intricacies of Orthodox theology with me, and who could blame them?  I live in many different worlds, and though my "Eclecticism" blog is a place where many of them intertwine, asking the general readers of this blog to dive into all things Orthodox with me seemed like an unreasonable request.  Still, my faith is important to me, and so--voila!  Blog #2!

There's my whole life story, the very truncated version, for anyone who has ever wondered how I woke up one morning and joined a religion in which all the churches have pictures on the walls, the clergy are called "Father," and the services involve more incense than the average 1960's hippy concert.  If you want to know more about Orthodoxy, come on over and visit "Philothei of Salem"!  If not, I promise the next "Eclecticism" post will return you to your regularly scheduled programming.
at 2:20 AM