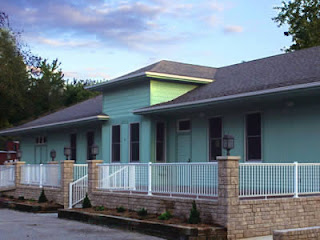 In my last post, I mentioned the Depot Museum in my hometown of Salem, Indiana, so I thought I would explain that reference further for the uninitiated, which being interpreted means, for my many friends who did NOT grow up in Salem.

Cecil J. Smith is emeritus editor-in-chief of the Salem Leader and the Salem Democrat, the two Salem newspapers which survived long after their two titles ceased to have any political significance.  Cecil lives in a beautiful old house in Salem, (which among other things has the dubious distinction of having once been the home of a grand dragon of the Indiana Ku Klux Klan!), with an old-fashioned carriage shed in the back yard.  The Smiths converted that shed into a usable space decades ago now, and over time, Cecil's lifelong hobby passion, model railroading, transformed a back garden shed into a well-known local attraction, The Train Shed.  I visited that layout when I was about 4 years old, at an open house Cecil graciously held as part of Salem's annual festival.  I never dreamed that I would later spend countless hours of my teenage years in or around that shed.

My father, John Campbell, Sr., was a relatively familiar name among Salem's inhabitants.  HIS father, Lebert Campbell, had founded Campbell Shoe Repair, a business Dad and his brothers helped maintain when Lebert died.  Dad also worked for several years as one of the primary voices of WSLM, Salem's local radio station, and pastored a church in Salem, as well.  With that odd combination of factors, Dad was at least guaranteed a certain notoriety.  But when he suffered a massive heart attack in his mid-40's, the year I turned 17, Dad found himself retired from all occupations overnight, whether he wished to or not.  He needed to find something with which to fill his time that was restful and enjoyable, yet made him feel a sense of purpose.

I don't personally know the details of how Cecil Smith and my father became friends--they'd at least known of each other for years, and Dad was also a fanatical rail enthusiast.  Whatever the progression, the two finally realized that Dad, Cecil and the Train Shed all had problems and could help each other solve them.  A busy newspaper editor could not dedicate the time he wished to his layout, and my father had never had the space or finances to build the sort of track plan he'd always wanted.  The Train Shed often sat neglected, waiting for the occasional school tour group to request an open house from Cecil.  All three found their solution in each other, and in the friendship the three established together.

Dad, Cecil and a small cortege of train fans living in and around Washington County, Indiana, had long mourned the final demise of the Monon Line, the indigenous railroad that had once been the pride of southern Indiana transportation.  Attractive, well-built Monon depots had once dotted the landscape of Kentuckiana, and as members of the last generation to see Salem's depot in action, Dad and Cecil had been scarred for life when they witnessed that depot bulldozed flat.  Depot reconstructions were going up all over the country, constructed as museums to various defunct railroads, and Cecil felt the time had come for a Salem Depot Museum.  I don't know the names of each volunteer involved in securing funds from county, state and private national foundations, but in 2001, the Depot actually materialized.  Dad and Cecil had come a long way from the Train Shed.

The Depot is a lovely building, a very detailed replica of the Salem Depot as it stood in decades past, with the delightful added feature of a basement model railroad layout.  The modular design displays miniature reconstructions of the towns of Washington County, as well as the Monon lines which connected those small towns.  It was my father's pride and joy, the fulfillment of his lifelong dream--he got to design a major layout, and watch his son put his associate's degree in electronics to use by constructing a fully automated control system to keep the HO-scale trains running without constant supervision.  This was a great boon to the Depot's staff of volunteers, especially during the annual city festival, Old Settler's Days, which still takes place every fall.  The Depot's open house during the festival is always a popular favorite, and the Depot volunteers are kept busy anwering questions and demonstrating their rolling stock, especially for their younger visitors.  (For those of you raised in Salem who have moved away, this is the new name for the old Fodder Festival.)

I'd like to take this opportunity to thank all those who contributed funds to the Depot, including those visitors from all over the world who pay the nominal entrance fee when they come; their donations keep the lights on and the trains running.  I wish to thank Dad's fellow Depot volunteers, especially "Louisville" John Campbell (so named to distinguish him from Dad, "Salem" John Campbell) (they're not related), for all their time and effort.  Thank you for keeping the Depot alive and honoring Dad's memory, even though he can't be there to do his part any more.  He loved all of you, and he loved that museum.  Most of all, I'd like to thank Cecil Smith, for demonstrating how a shared dream and a basic compassion for one's fellow man can cross lines of class, socioeconomic status, and even religious differences to create lifelong friendships.  You're kind, decent people, Cecil and Martha, and Salem is lucky to have you.

Cecil's Tribute to Dad in the Salem Leader
at 4:00 PM