Oh, mea culpa, and yet, the relief of admitting and embracing my defeat is actually quite pleasant.  After plugging away valiantly for a while--and then not getting a single line further since the last time I wrote about it--I have given in to the crushing gravitas that is A Distant Mirror, and said good-bye to the "Calamitous 14th Century."  At least, I have for now; I hope to get back to it someday.  Since I began this project of actually reading the books that I own, I've begun to understand why so many people publish lists of the books they say I simply must read BEFORE I DIE.  I need to get around to it eventually, but it's not high on today's To Do list unless I want to be depressed, or so bored that I can't stay awake.  Yes, I'm talking about you, Proust!

Anyway, I put away the 14th century today, and got out my copy of The Know-It-All, the book that really launched A. J. Jacobs' career as a writer of lifestyle travelogues.  For those not familiar with the book or its author, this is the guy that set himself the task of reading the entire Encyclopedia Britannica, and The Know-It-All is his running commentary on the project as it was in progress. 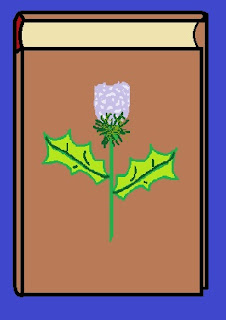 He also went on to write The Year of Living Biblically, in which he tried to better get in touch with his Jewish faith by following every letter of the Mosaic Law for one year.  That book is simply a wild ride, an often hilarious romp through the absurdity of religious texts once they're out of their context, and an all-round good read.  I highly recommend it.

I don't know yet if I can recommend The Know-It-All, but it's heavily favored to go more quickly than A Distant Mirror  did, because A. J. Jacobs tends to be a lot like PBS reality shows--much more intelligently written than other people's efforts in the same genre, but still light and fluffy enough to be a little bit like cotton candy for the mind.  We'll see if this book holds my interest.  (When in doubt, just blame the books for not being interesting enough!)

I must add one further update to the library project while I'm on the subject.  I said at the outset that I would try to resist the temptations of new e-books and library supplies.  Yeah, my library card has still been pretty well-traveled the last few weeks.

My Kindle was growing a layer of dust, forlornly sitting on the end table by my chair with a dead battery, until my FABULOUS mother-in-law gave me gifts cards for $50 worth of Kindle books.  $50 + shopping for new books = very happy me.  Oh, dear.  This reading project is going to be with us for a while, I can tell from here.
at 12:03 AM