Okay, all, I just had the geekiest birthday imaginable, and I have my loving, supportive family to thank for it.  Yes, I'm an "out & proud" Geek, as is my husband, Michael, and those of you who know us personally have long been aware of this.  But for those new to the area, let me flash my geek credentials for a moment.

First Atari--age 9
Original NES--kept it until I was in grad school, and eventually had to buy an emulator, because I could not live without...
ORIGINAL ZELDA--the ONE and ONLY truly great Zelda game
Star Wars--The first movie and I were born the same year, and I went to a drive-in to see it with my parents when I was still an infant
Star Trek--I own every episode of ST:TNG & Voyager, have seen every episode of TOS & Deep Space Nine, and have nearly finished watching every episode of Enterprise and even THE ANIMATED SERIES
LOTR--Own all three extended version deluxe editions, all the books, a copy of The Hobbit, and a copy of The Silmarillion, of which I've actually read at least 1/3.  That's farther than a lot of people get, anyway.
Harry Potter--I am currently reading the whole series for the 5th(?, maybe 6th?) time, and own every one of the films released thus far, the first 6 in the ultimate editions.

In other words, I am seriously what Michael affectionately calls a "BBD" or "Big Buttery Dork," and I am extremely content that way.  Michael's geekiness runs to other outlets, so he gets a bit weary with all cult classics, all the time around here.  Nevertheless, loving man that he is, he bought me ***drum roll*** The Harry Potter Hogwarts Express Lego set for my birthday!  Isn't he wonderful?
The real star of the show tonight, however, was my mother-in-law, Debbie.  We assembled to celebrate my birthday (which isn't for another three days, but my in-laws will be gone on vacation then).  When we cut the cake and opened the gifts, I discovered that Debbie had bought me a Pharaoh's Quest Lego set!!!!!! 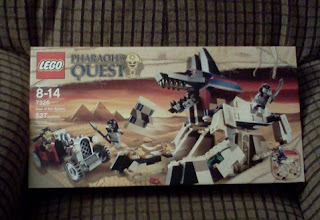 It's one thing when your fellow geek husband buys you Legos for your 34TH BIRTHDAY, but when a mother-in-law who is completely innocent of even an ounce of geek blood buys you Legos, you know you've found THE COOLEST MOTHER-IN-LAW EVER!!!!  You rock, Debbie.

P.S.
Another article published!  Be sure to check it out at ViewsHound.
at 11:44 PM