Review of "Sherman: The Ruthless Victor" 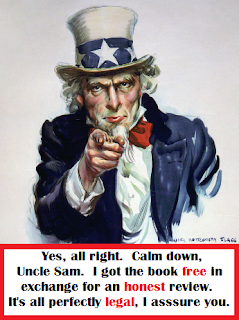 When I finished reading my last book through Thomas Nelson's Booksneeze program, I decided I would choose another in their series of short biographies on American generals.  I enjoyed the first of them I'd read, so this seemed a pretty safe bet for a decent read.  And yet, there should perhaps have been warning bells going off in my head from the moment I read the subtitle.  Perjorative terms like "ruthless" aren't usually whipped out THAT early in the game!  Still, I knew to what the authors were referring--Sherman's infamous "burning of Atlanta" and "march to the sea," which were the 19th-century equivalent of the "firebombing of Dresden" during World War II.  Everyone pretty much agrees that Sherman's actions were short on military justification and long on overkill, so I just figured the authors were making clear up front that this book was not going to glorify Sherman for those events.  Well, it certainly doesn't glorify him!

Those belated alarm bells did start *bonging* quite stridently as soon as I turned to the first page of the Introduction.  One of the primary things upon which a good biography depends is creating some sort of rapport between the reader and the biographer's subject.  Since the writer is recounting historical events, some attempt at objectivity is expected, but books of this type usually have some shards of sympathy in dealing with the person under study.  Not this one.  The authors' primary goal seems to be to unite readers with them in loathing and disdaining William Tecumseh Sherman.

I have known of Sherman's exploits in the deep South during the Civil War for many years, so I was never very fond of the man.  By the time I finished this book, however, I had become so weary with hearing him denigrated that I found myself becoming one of his most vocal defenders!  Page after exhausting page of insults, insinuations and diatribes against him left me with far greater distaste for the authors than for the general.

Time and again, words like "white supremacist" are bandied about, with seemingly no recognition that Sherman simply held the views typical of his time and place, repugnant though they are to a modern reader.  The biographers imply more than once that Sherman was mentally unbalanced and descended from a long line of insanity.  He is accused of "gratuitous pyromania," being a man of "shallow" "emotional depth," "acute misanthropy," "elitist contempt for 'commoners'," and of "feeling ... sorry for himself" after a Union loss in battle and thinking solely of how the setback would affect his career.  He was supposedly "calculating," "[e]gotistical and narcissistic," "wallowing in self-pity" when suffering from depression and anxiety issues, "incapable of withstanding any criticism," "self-congratulatory," "petulant," and given to outbursts of "despotic absolutism".  If that list felt unnecessarily long, and you were thinking to yourself halfway through it, "Ok! We get the point!  Get on with it already," then I have done my job as a reviewer in giving you the exact experience of reading this book without you having to do so.  You can now make up your mind whether or not you think it's worth the time, effort and money to acquire it.

With all that having been said, you may be wondering why I didn't give this book the lowest possible rating.  The answer is simple.  During the section when the authors were discussing historical events of the Civil War, taking a break from belittling Sherman, I actually learned some interesting things.  If there had been a great deal more emphasis on the great conflict throughout the book, it would have been a fascinating read.  Also, I always feel that a book has had some merit in my life if it instills curiosity in me to read other books.  This one certainly made me want to read some other biographies of Sherman, to see how he fares under another's pen.
at 10:47 PM