I've been playing catch-up all week, since my wonderful Good Man Michael and I took a weekend trip together (post coming as soon as I get some pictures pulled together).  Meanwhile, though it is barely still Tuesday--and isn't still Tuesday at all in some parts of the world--here is my contribution to this week's Top 10 Most Giftable Books on The Broke and the Bookish. 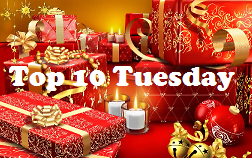 10. Big Bang by Simon Singh--I bought this book as a Christmas present for myself this year.  In many ways, my science education throughout all my years of schooling was WOEFULLY inadequate, due in large part to the fact that I was raised in a fire-breathing Pentecostal household, and most Pentecostals are terrified of science, all its pomp and all its works.  Ergo, I am attempting to educate myself by filling in the gaps I missed.  I wish I could buy copies of it for all my family members who are still Pentecostal.  But then, I don't really see a point in giving all my relatives something with which they would immediately build one giant, communal bonfire.

9. Olivia Claus by Kama Einhorn and illustrated by Jared Osterhold--This isn't exactly a long-beloved children's classic or anything, but my SuperToddler LOVES Olivia and the book is very cute, so I got it for her.  She was thrilled with it when I surprised her with it the morning after I bought it.  I believe that Christmas-themed gifts should be given BEFORE Christmas, don't you?  Otherwise, you don't have any time to really enjoy them before the season is over for another year! 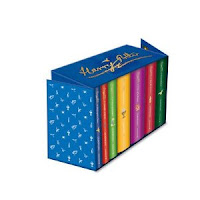 8. If I could, I would buy my brother the entire Harry Potter series in the most beautiful collector's edition available.  There are two reasons why I can't.  First, those special editions cost a fortune per book, let alone buying them all in one go.  Second, he firmly believes that Harry Potter is of the devil and is a satanic plot to surreptitiously teach children witchcraft under their parents' very noses.  (I can't judge him too harshly; I used to believe exactly the same thing.)  However, I think he could really get into them and we could have some AWESOME conversations together, if he'd just read them, especially since he's completely nuts for some video games that happen to use magic heavily.

7.  Go the F**k to Sleep by Adam Mansbach and illustrated by Ricardo Cortes--I would buy this book for anyone I know who can tolerate the full range of the English language and has a child anywhere between ages 2 and 10.  I LOVE the fact that this book is a fully-illustrated, hardback picture book, just like any juvenile literature you see in the library, with the one major exception that it is written to be read ONLY by parents (or those who babysit a lot).  This book is hilarious, and I cannot recommend it highly enough for those days when you feel like you are slipping slowly into toddler-induced madness.

6. The Bible--If I sat down and figured it for a while, I'd probably find very few years during which I didn't either give or receive a Bible.  What type of Bible depends on a number of factors; one year, Mom wanted a really reliable translation.  Another, she wanted to examine the Septuagint more thoroughly.  This year, I would be buying for a young friend of mine, a girl my mother and I used to babysit and practically helped raise for the first few years of her life.  She's half American and half Brazilian, and is headed to spend a year of her teen-aged life in the South American paradise.  She's trying to learn Portuguese in preparation, and I can only say that whenever I've been studying a language, I've always found a Bible to be an ideal study tool--a text with which I am already familiar helps me catch important vocabulary points and idiomatic expressions.

5. The Penderwicks at Point Mouette by Jeanne Birdsall--For years, my mom read to me and my brother when we were kids, and around the time I started college, my parents and I began to experience a role reversal.  My dad's advancing diabetes and heart disease, overall deteriorating health, led to his partial blindness.  When he could no longer read for himself, I began occasionally reading books aloud to both of them when I was home on vacations.  Mom and I were still working our way through the first Penderwicks book when she died.  I'd love to be able to read the latest one to her.

4. Regretsy: Where DIY Meets WTF by April Winchell--In the world of handmade crafts, I guess I'm an all-around traitor.  I crochet, I'm trying to learn to knit, I make jewelry, I make rosaries--and yet, I love both Etsy AND Regretsy.  Apparently, that paradox demonstrates some heinous flaw in my character, but there it is.  I was browsing on Amazon one night a few months ago, when I stumbled across this book and laughed so hard I nearly fainted.  I'd love to buy copies of it for all my crafty friends, except I'm not sure they would all take it in the spirit in which it was intended.  I would give it for fun, but some of them might think I was insinuating something.  (For the ones who still crochet toilet paper covers, that's exactly what I'd been doing.  Which is why I won't be giving these as gifts, though I really want to.)

3. The Unknown Book--Did you ever read a book in childhood, LOVE it, promptly forget what the title was when you returned it to the library or lost it while moving house, and long to own a new copy of it or give it to someone else as a gift for basically the rest of your life?  I have several of these.  One was a boardbook I owned and simply adored when I was really young, about a kid looking outside his window to watch the seasons changing outside.  Another was a library book about a family who got conned into buying some swamp land, only to find out it was the most magically fertile farming land on Earth, and would grow entire forests overnight and crazy stuff like that.  My greatest loss, though, was a children's book about a boy who took a simple cardboard box and piece of string and created forts and castles and all sorts of amazing, imaginary adventures for himself.  If you can identify any of these books by the snips I've been able to remember about them, you'll make one book blogger very happy this Christmas!

2. Wreck the Halls: Cake Wrecks Gets "Festive" by Jen Yates--Okay, I think purchasing this book as a Christmas gift definitely wins me the daughter-in-law of the year award.  For about two years now, Michael and I have been sharing tidbits from the riotously catastrophic world of Cake Wrecks with his parents, but they've never actually visited the website themselves and still have only a vague idea who we're talking about when we mention Jen and John Yates.  How timely, then, that Jen released a book of winter holiday wreckage in time for the Christmas shopping season this year.  My in-laws are getting a copy of this book, and whether they enjoy it or not, I think they'll be finer people just for owning such awesome geekery.  (In case you're wondering, they don't read my blog, though it would be my luck if they finally start reading it today!) 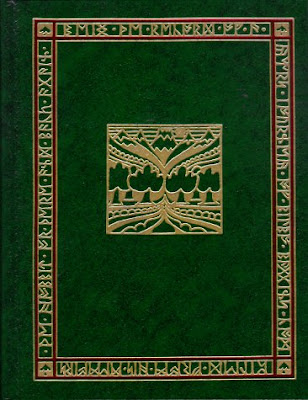 1. The Hobbit, or There and Back Again by J.R.R. Tolkien--This isn't a book I'm giving or would like to give this year, but is instead an account of my greatest book-giving Christmas triumph to date.  By miraculous good fortune, I managed to find the above photograph of the actual edition in question on Goodreads, so when I tell you that a decade ago, I bought my brother a beautiful, slip-covered copy of The Hobbit with runes embossed on the cover, you can see exactly what I'm talking about.  My brother has loved Tolkien's Middle Earth for years.  He also has the well-deserved reputation of being the best in our entire family and circle of friends at picking exactly the right gift for people.  You can imagine my sense of gratification, then, when he was thrilled and floored when he opened THIS present!  He was even more shocked when I read the runes on the cover to him.  He thought they were one of Tolkien's invented languages, like Quenya.  Turns out, Tolkien used the good old Futhark (or actually, the Anglo-Saxon "Futhorc") for his dwarvish written language.  I shouldn't have said so, though; to outsiders it would just make one a bigger dork, but among fellow geeks, it practically gives you geek god status if you actually read and speak artificial languages!  Qapla'!
at 9:50 PM