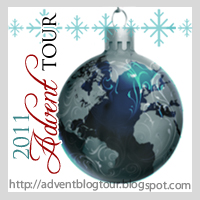 7 years ago today, I embarked on a brand new life, almost a complete departure from everything I had ever known or been taught to believe.  After 25 years spent as an extremely fundamentalist and conservative Pentecostal, and after almost a decade of college, the views I had been taught by those two experiences could no longer be reconciled.  I believed in Christ, but I did not believe in Pentecostalism, and after a long, hard search fraught with fear and doubt, I found a church where I could belong, and became an Eastern Orthodox Christian.  As Christmas had always been my favorite time of year, when my priest asked me on what date I would like to be received into the Church, I said I wanted sometime close to Christmas, and we settled on Sunday, December 12, 2004.

My parents pastored various fundamentalist Pentecostal churches over several decades, and though I didn't know it when I was very small, they firmly believed that Santa Claus had no business sticking his whiskers into Christmas.  Vaguely aware that St. Nicholas had been an early Christian bishop, they respected the actual historical figure in so far as they could, but they "didn't believe in bishops," feeling that an episcopal hierarchy smacked of papism.  They didn't accept the concept of saints as many Christians embrace them.  St. Nicholas was just an all-round problematic figure.  They didn't speak of him to me one way or the other when I was very young, not wanting to teach me about "Santa Claus," and yet knowing I had already absorbed the information from the culture around me, so they didn't want to hurt my feelings by digging into the matter too deeply.

When I was four, however, some bright spark who was two or three years older than me saved my parents the trouble, when he got the idea to tell me, "Santa Claus is dead!"  I still remember going to my mother in tears, asking her if this was true, and she did her best to explain to a 4-year-old mind the historical facts behind the legend of Santa.  It didn't work out too well.  Mostly I just remember continuing to cry.  A lot.  Mom pointed out that I should remember how this felt, so that I wouldn't go around telling other little ones things they weren't yet ready to hear.  That message, at least, did sink in--I didn't want to ever do this to anyone else!  I spent the next twenty years firmly putting Santa out of my mind, feeling toward him and anyone who taught their kids to believe in him the intense anger that only the betrayed can muster.

In December 2004, however, Santa Claus and I made peace with each other.  My heart melted, and the wound mended.  In Orthodox parishes, "Saint Nicholas"--played by a relatively thin male member of the Church dressed in the long robe and pointed miter of a Western bishop--visits the parish children at the church every year.  He talks for a few minutes about the love of God in Christ, about the need to be obedient to one's parents and kind to everyone, and then perhaps he will give each child a small treat.  During one Sunday morning service, the priest reminded us all that Saint Nicholas would be meeting with the children in the nave (the central area of the church) after service, while the adults were welcome to enjoy coffee in the social hall as always.  Unable to help myself, I asked my godmother (the woman who stood with me as I was received into the Church) if it would be alright for me to sneak in the back and watch Saint Nicholas speak to the children.  She assured me that would be fine.

﻿﻿What I saw was nothing short of magical.  In the small nave, with candles still lit in the vigil lamps before the icons of Christ and His Mother, a figure in red robes entered, his staff in his hand and his miter adding several inches to his height.  I knew who he was.  I was well aware that he was someone I saw at church every week, wearing a long-used costume.  None of that mattered to me in the slightest.  A four-year-old girl inside me got Santa Claus back that day, got to meet him, to venerate a great saint of the Church and a bishop who served his people long and faithfully, a man so compassionate and kind that children around the world have loved him, their patron saint, for over 1,700 years.  Santa Claus came to visit me.  My Church gave me back St. Nicholas.  It was one of the happiest, most magical moments of my life.