"In the wee small hours"of this morning, the woman who taught me to love Christmas with a pure, unrelenting joy died.  From her, I learned that Christmas, one of the holiest of holy hours, is genuinely a magical time, when the world puts on its best self, and transforms even its humblest aspects into beauty.  My grandmother was not a doyenne of gracious living.  She was not wealthy, not an intellectual, not a trend-setter.  Her chief visual aids in teaching me a life-long reverence for Christmas were twinkling lights slathered on every flat surface, and numerous bags of Fiberfill, spread around cute little village scenes all over the house, playing the part of a gargantuan snowfall.

Grandma grew up as the skinny, spindle-legged daughter of poor farmers.  Both her parents worked the fields of land someone else owned like an unstoppable team of Clydesdales.  Even pregnant with twins, my great-grandmother put in a full day's work at her husband's side just to feed their family which would eventually include 8 children.  My grandmother was the oldest, and she was a surrogate mother to her younger siblings while their parents sweated through the merciless Kentucky summers. 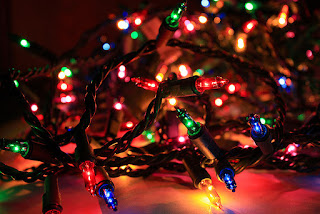 All eight of those children wore clothing made from old feed sacks.  They had one new pair of shoes each year.  Grandma was 13 years old the first time she saw an indoor toilet--the flushing of which scared her so badly that she went shrieking down the hallway!  For them, Christmas meant one piece of candy and perhaps one homemade toy each; some years, it was basically just another day.  But their mother always made sure that something nice happened for Christmas, that in some way, the day made a positive impact on their little minds that would stay with them the rest of their lives.  When Grandma was living in very different conditions--what might as well have been a different lifetime--with four children, many grandchildren, a snug little eclectrified house with a telephone and plenty of hot and cold running water, she made Christmas her own personal wonderland, and selflessly offered it to each of us, too.

My grandmother filled every inch of her world with beauty, and that beauty spilled out onto the surprised and delighted people around her.  She made beautiful flower arrangements, that helped others celebrate their joys, and mourn their losses with dignity and quiet strength.  No one could meet her without eventually smiling before the conversation ended.  She never met a person who was beneath or outside of her compassion, her mercy and love for complete strangers.  If ever I saw the face of God through the behavior of another human being, it was in hers.  The meek and poor in spirit can claim Earth and the Kingdom of Heaven as their own, and that is as it should be; they are the only people who will be eager to freely share it with the rest of us once they own it.
at 6:28 PM