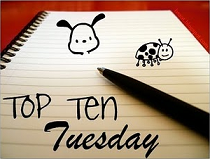 This week on our Top 10 Tuesday list, brought to you by those delightful folks at The Broke and The Bookish, we all have confessions to make.  We are freely announcing to the world books we bought with reckless abandon, completely heedless of what the contents might be, because of the stunning cover art or the unbearably clever title.  On top of which, I have to confess also that I had to wrack my brain to come up with ten of these, because I almost NEVER do that!  I'm far too much of a control freak to let my buying wend its way along like that.  I like to know what I'm getting into BEFORE I plunk down any coin of the realm.  But, I did manage to think of the requisite ten that basically fit the requirements, after soul-searching and combing through my Goodreads shelves. 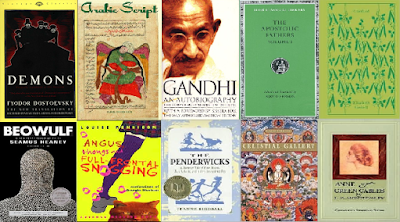 10.  Demons, by Fyodor Dostoyevsky
Dostoyevsky is hardly an unknown--I've been promising myself since Middle School that I would read The Brothers Karamazov one day; I'm deteremined to do it in 2012 or perish in the attempt.  So when I came across another work of his with such a provocative title and spell-binding cover, I had to have it.  I'm deteremined to read it someday, too.

9.  Arabic Script, by Gabriel Mandel Khan
Do you see the picture of this book's cover up there?  Add to that the fact that I was an Arabic language student at the time.  Enough said.

8.  Gandhi, an Autobiography: the Story of My Experiments with Truth, by Mohandas K. Gandhi
Great photograph of a great man, and a title that wouldn't let me walk away.  I have never finished it yet--college assigned readings kept getting in the way--but based on the bit I've managed to read thus far, it looks pretty good.

7.  The Apostolic Fathers: Volume I
This was a Loeb Classical Library edition.  At the time I bought it, I didn't even really care what it contained that much; I just love the Loeb Classical Library.  These days, I also dearly love the letters of St. Ignatius of Antioch, so that turned out to be a win-win situation.

6.  Cranford, by Elizabeth Gaskell
I always figured I would eventually get around to reading this book someday--clearly, it wasn't high on the priority list--until it was released as a Penguin Hardback Classic.  That moved it very quickly up my must-have list.  They're just so beautifully designed, aren't they?

5.  Beowulf
Again, a well-known title.  It was the release of a new translation that made me buy it, but primarily because of the awesome, shiny representation of chain mail armor on the cover, more than any scholarly reasons!

4.  Angus, Thongs and Full-Frontal Snogging, by Louise Rennison
I don't find the cover of this book that captivating, especially since it features the main character's cat so prominently and I am terribly allergic to felines.  But that title!  How could you walk away from that title, especially if you're a YA fan like me?

3.  The Penderwicks: a Summer Tale of Four Sisters, Two Rabbits, and a Very Interesting Boy, by Jeanne Birdsall
This one had awesome title AND delicious-looking cover going for it, so it had to be mine.  I adore it; in my opinion, it is the Little Women of my generation.

2.  Celestial Gallery, by Romio Shrestha
Beautiful.  Absolutely gorgeous.  From what I understand, this book is not terribly indicative of classical Tibetan Buddhist art, as the author felt free to reinterpret the classic forms whenever he chose.  Still, his work is breathtaking, the colors mezmerizing, and I fell in love at first glance.

1.  Anne of Green Gables (100th Anniversary Edition), by L. M. Montgomery
To clarify, I did not buy my FIRST copy of this book for aesthetic reasons.  Actually, I didn't buy my first copy at all; my parents did.  No, some twenty years after I first discovered my beloved Anne, this 100th anniversary edition was released, featuring a facsimile of the ORIGINAL cover, and I knew I had to own one.  I honestly don't know how many copies of this book I have floating around my house, but I do know it's more than one, and I do know that it's getting ridiculous.
at 11:34 PM