Review of "And Then There Were None" 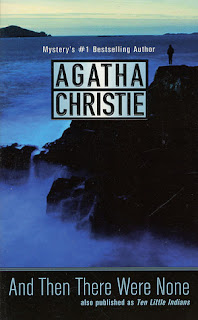 Creepy!  Oooo, creepy, creepy stuff.  Believe it or not, this is the first Agatha Christie novel I've ever read in my 34 years of life, and now I finally see what all the fuss was about!  Before I read this, I imagined that Agatha Christie herself must have been a sort of pink-wearing, cat-loving, tea-pouring old British lady, and therefore her mysteries wouldn't be made of very stern stuff, either.  Now, I am firmly convinced that Stephen King wishes he had half the sick, twisted mind that this tough old bird had.

And Then There Were None is THE original pick-'em-off murder story, upon which Clue (both movie and boardgame) and a lot of other light-hearted nonsense has been based.  There was nothing light-hearted about this book.  10 people are lured to an island under false pretenses, bumped off one by one, and slowly go insane as they get more and more distrustful of each other.  Before it was over, I had practically considered everyone from the butler to the dining room table a suspect, and still didn't see the ending coming.  A word of warning, by-the-way; if you are at all of a nervous disposition, don't read this book late at night.  First of all, once you're about half-way through it, you won't be able to put it down and go to bed, because you'll have a desperate need to find out what the Hell is going on?!?!?!  And secondly, I finished this right before finally going to bed at an unholy hour, and the highly predictable dream dripping with homicide inevitably ensued.

I cannot give this book a full five-star rating for only one reason; after the amazing build-up of suspense and terror during the slow execution of the house guests, no ending on earth could have truly satisfied my fevered brain, and this one did not fail to disappoint.  I mean, the identity of the perpetrator certainly surprised me, but the way in which the ending was constructed felt very anti-climactic after all that lead-in time.  Still, this book is thrilling and horrifying, replete with lunatics and nut-jobs, just as any good murder mystery should be, (at least, it should if you're a long-time fan of Midsomer Murders, like me).
at 11:58 PM