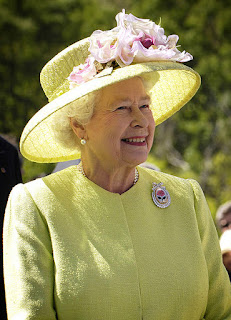 Okay, Royal Watchers--and those of you who aren't, I'm afraid you're along for the ride on MY royal watching for this post--HUGE news out of the Commonwealth today.  The laws of succession have officially been changed, or at least, they will be as soon as the paperwork is done.  Any oldest child of the reigning monarch, regardless of sex, will be the heir apparent to the throne.  (Don't worry, this doesn't change anything about the present; Charles IS the oldest child, and he only has sons.)  Moreover, the monarch can marry a Roman Catholic, so we can finally consider THAT witch hunt called off after 500 years, although the monarch still can't BE a Catholic, because he or she has to be the head of the ANGLICAN church.  So that would be a bit awkward.

What many Americans may not realize is how severely limited the Queen's role is, and that Parliament--not the sovereign--controls matters like the laws of succession.  The monarch has to be above disputes over politics, so if Parliament issues a law, the Queen is not allowed to publicly comment on it.  However, according to the newscast I saw on-line today about this big announcement, the Queen allowed it to get out through the usual channels, i.e. a private secretary was allowed to speak anonymously to the press, that she was in favor of these reforms that would bring the UK somewhere within sight of the 21st century.  Imagine that!  A Queen who is in favor of gender equality.  God save Her Majesty, Queen Elizabeth II.
at 3:47 PM