Review of "Odd and the Frost Giants" 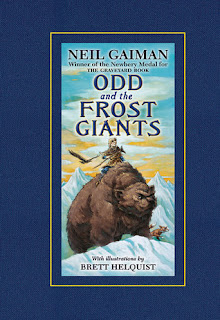 Odd and the Frost Giants
by Neil Gaiman

This was my first Neil Gaiman book, and having now finally read one, I begin to see what all the fuss has been about.  I'll have to read more from him before I decide that he's one of my new favorite authors or anything, but I liked this book pretty well.

Odd is a young boy living in a Viking village of some long-ago, undisclosed year.  His life has gone from reasonably good to depressingly bad in a very brief span of time, and he has just gotten fed up with the whole thing when the REAL adventures begin.  Odd finds himself entangled with Norse gods, talking animals, and a Frost Giant, all in one small, 130-page book.

My only real complaint was the way that characters periodically burst out into totally anachronistic language.  I think it was Gaiman's way of lightening the mood, but he seems to have taken his research for this book rather seriously, and it was a shame to ruin that by then creating 21st-century dialog to go along with the longships and great halls he verbally constructed.

Other than that, I really enjoyed this book, and I hope that he will, indeed, write more Odd stories [ :) ], as he threatened to in the author bio blurb.
at 7:46 PM

Email ThisBlogThis!Share to TwitterShare to FacebookShare to Pinterest
Labels: 4 Stars, Reviews, YA