Obviously, I supported the idea of the Read It 1st pledge from the moment I first spotted it on another blog--in principle, anyway.  But I found myself thinking that taking a pledge about it was perhaps a bit extreme.  Yeah.  I'm over that now.  I just took the pledge, and invite all book bloggers to do the same.

Here's the story.  The Granada dramatizations of Sherlock Holmes, with the incomparable Jeremy Brett as the eponymous sleuth, are fabulous.  Nevertheless, they're not as good as the books--big shocker--so there you are, already knowing the whodunnit when you start reading the book.  Big mistake.  Don't get me wrong; I really enjoyed reading The Sign of Four.  I just would have enjoyed it a good deal more if I didn't already know the general outlines of the solution.

NOW, having gotten that grumble out of the way, let us proceed (as if the grumble never happened) to a review of The Sign of Four.  WARNING:  There are some serious spoilers ahead, but I promise that I at least WILL NOT REVEAL THE MURDERER, so you've still got that to look forward to, if you've never read this before and wish to do so now. 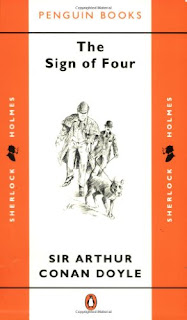 So, what is our favorite analytical genius up to in the latest installment?  A woman comes in search of news of her father, missing 10 years, after she gets a strange message about long-standing wrongs that need righting and a hint of incredible riches.  Before it's over, Holmes and Watson, with some unorthodox help, have searched up stream and down all over London for the world's most bizarre villains.  It's a story that takes us to the India of imperial England, through the history of an Indian uprising, and into some extraordinary reminders of the racism of the Victorian era.  It's also a reasonably gripping mystery.

SPOILER #1:  Did you know that Sherlock Holmes is a hardened cocaine user?  Yup.  That's really all I have to say about that, except that in his day, cocaine wasn't illegal yet, and lots of hard drugs were routinely prescribed and easily available.  May not want to hand a volume of Sherlock Holmes to your adventure-book-seeking kid without some parental guidance, however.

SPOILER #2: Did you know that Dr. Watson got married in the course of this series?  I was kind of annoyed with Conan Doyle for this, honestly, because it ruined the whole male bonding, buddy books vibe that Holmes and Watson had going.  I'm glad sweet little Watson won the heart of his lady love, but I think it should've happened much later in the series.  I have a feeling this was one of Conan Doyle's numerous attempts to retire the detecting duo.  Sherlock Holmes' adoring public would never let him do so, though.