Review of "Out of a Far Country" 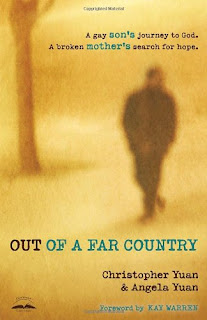 Confession:  Yes, I admit it; I accept free books in return for honest reviews of said books, including this one, which I am reviewing for Waterbrook Multnomah.  I have now done my duty as a law-abiding American.

I must say, in some ways this book was not what I expected it to be at the outset.  First and foremost, to my great relief, it was not another Christian writer's account of getting a gay man into good therapy and thereby "curing" his homosexuality as if it were some sort of mental disease.  In fact, despite the glaring use of the word "gay" on the cover, Christopher Yuan's sexuality sort of became a subplot before this book was over.  Though this is a bit of a spoiler, I think you have the right to know what you're getting into if you set out to read this--it is primarily the story of a felon who also happens to be gay.

While this book definitely has some positives, one of the things I don't like about it are the subtle implications that Yuan's experience is representative of all gays in the US.  If you don't happen to know any gays or lesbians personally, you might well walk away from this book thinking that they all slip slowly and steadily into the hard-core drug scene simply as a part of the overall lifestyle.  I don't have statistics on the matter or anything, but I can say that I have a few gay friends, and none of them have a drug problem.  The two are by no means synonymous.

Another thing that really bothered me in this book was the way that the Evangelical understanding of conversion to Christianity is presented.  On page 44, Angela Yuan, Christopher's mother, mentions that her husband, Leon, "had been baptized Catholic in college," then goes smoothly on a mere 14 pages later to indicate that despite that baptism, Leon was not yet a Christian.  "In the fall of 1993, Leon began attending a Bible study called Bible Study Fellowship, and it was there that he surrendered his life to Christ."  The implication seems to be that one can only come to faith in Christ through the authors' particular type of Church, through one particular culture's views of what it means to be a Christian.  Several times throughout the book, the authors seem forced to renounce their traditional Chinese values, because they directly contradict Christianity.  Surely one can be Chinese and a Christian simultaneously.  We convert to a faith, not a hemisphere.

The phrase "surrendered his life to Christ" is also very characteristic of this short book, as it seems to constantly consider a person's coming to faith to be a battle between that person and God.  Angela Yuan routinely talks about trying to trick or coerce her son into accepting Christ by surrounding him with Christian radio in his parents' house, or taking him to hear a dynamic speaker who might be able to persuade him.  Moreover, she insists on stridently working her faith into conversations where it is not necessarily appropriate, such as a visit to the dean's office at the university her son attends.  As an Eastern Orthodox Christian, I can say honestly that it is this sort of combative attitude from Evangelicals that often turns me off ﻿, and one reason I reviewed this book was to discover what the middle ground was between my Church and other Christians.

The negatives having been mentioned, however, I did find some of that middle ground.  I was especially impressed with the fact that Christopher Yuan made clear that his mother's only attempts to "cure" him of homosexuality ended in abysmal failure, and he came instead to understand human sexuality in a different way altogether than I would have expected.  Let me be clear; this book does not endorse homosexuality as being compatible with Christianity, and neither do I, and nor does my Church.  In order to avoid complete spoilers, I will say only that the perspective on sexuality which Yuan finally reaches is one that I as an Orthodox Christian can accept, and I was not expecting that based on this book's cover.

Finally, this book is simply interesting, well-written, and to my surprise, rather suspenseful.  It held my interest, that's for sure.  Unless you're really put off by religious content in your non-fiction (or by non-fiction generally), you'll probably find this a quick, interesting read.
at 12:53 AM