Yes, I've discovered yet another weekly meme/blog hop.  When I see several bloggers that I like and faithfully follow posting about a meme, I figure it's probably too good to pass up, and as it so happens, this one is right up my street, even though I haven't been blogging long.  It's actually called "In My Mailbox," but since I receive books both through my mailbox and by Kindle in this modern age (with all its new-fangled technology), I thought "inbox" might be more appropriate. 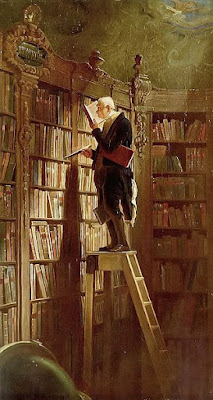 So, The Story Siren hosts this meme every Sunday, and it's just a way to update everyone on what you've bought, checked out from the library, or otherwise received in the world of books lately.  "Now wait a minute!" I can already hear you declare.  "What happened to 'reading your own library'?  What happened to swearing off acquiring anything new until you've whittled away some of what you already have?"  And the answer is, nothing has happened to it.  I am diligently working my way through not one but two books simultaneously that fit the requirements of my challenge.  However, like many bloggers, I blog for books, meaning that I receive FREE books periodically, in return for posting (sometimes brutally) frank reviews about them.  I am also a member of Paperback Swap--and if you're not, you're really cheating yourself out of an awesome way to get rid of books and get different ones in return--which means I get more free books.  Besides, I bought the few used ones I've recently gotten in the mail from Amazon BEFORE the challenge started; they just took a while to get here by media mail.  (I LOVE media mail when I'm SENDING, not so much when I'm receiving.)

Anyway, here's what came into my inbox recently, and by coincidence, all of these did actually come through the post.

-And Then There Were None, by Agatha Christie--free through Paperback Swap; saw another blogger's review and had to read it.  I've already reviewed it.

-Whose Body?, by Dorothy L. Sayers.  Another author I saw reviewed recently and decided I had to finally give her a shot, after thinking about doing so for years.  The review was actually for a later volume in the series, but of course I had to start at the beginning.  This one was also from Paperback Swap.

-Pershing: Commander of the Great War, by John Perry.  Thomas Nelson Publishers sent me this one free, and are now patiently waiting for me to hurry up and review it.  I better get on that project soon.

Those are the books which have stacked up around me recently.  Now you see why I challenged myself to not acquire any more books for a while until I've gotten through the ones I have!
at 1:20 AM