Have you ever been defeated by a book?  Of course, we've all given up on books, reads so hideously awful that we promptly bestowed upon them the "Dorothy Parker Award," hurling them across the room "with great force."  But I'm talking about books that bested you in fair combat.  Decent reads, or even interesting, engaging volumes, that you just seem unable to finish for some reason.  Life suddenly got complicated the last time you picked up that particular book and tried to read it, and by the time you got back to it, you'd forgotten what it was about and would have had to start all over.  Again.  Or perhaps it's just a really complex plot, with a woefully confusing cast, like War and Peace.  Maybe you had to take it back to the library because you'd already renewed it three times and begged your way into one MORE renewal, and they're starting to look askance at you when you even walk through the door, convinced that you've actually lost the book and are too scared to own up.  There can be as many reasons as there are books in the world that defeat occurs, but whatever the cause, you find yourself staring, yet again, at the cover of a book you've opened several times, embarked upon its journey with the best of intentions, and a month later, admitted that it wasn't going to happen, and went back to Harry Potter for some comfort reading while you licked your wounds in disgrace.

This post is where I bring my book defeats out of the closet, confess the names of the worthiest opponents with whom I have ever crossed swords, and renew my determination--oh yes, I will triumph.  To the following books, I can only say, I'm coming for you.

Sir Walter, you and I have a date with destiny.  The last time I tried to dive into Ivanhoe, I was twelve.  I couldn't make heads or tails of what you were talking about.  This time, I will finish the book, mark my words.

How many times did Anne Shirley taunt me with references to this book?  What little I did get through was hilarious, but 800 pages?  At the age of 16, I had never yet read a book over about 500, and it just seemed too daunting.  Now that I've read my way through over 4,000 pages of Harry, I'm feeling up to the task.

If you can't understand how a Tom Clancy novel could best a devoted reader, you've obviously never read one.  They're fabulous, at least in my opinion, but they're extremely thick, and I'm not talking about page count.  Clancy's plots are involved, multi-faceted, with more characters than any modern author should decently be able to keep track of, but he manages it.  I find it mentally exhausting if I've also got other things going on.  Last time I tried this one, I was a graduate student.  Now, I'm a stay-at-home mommy.  I like my chances better this time.

Ecclesiastical History of the English People
The Venerable Bede

I love Bede.  I love this book.  You would not believe how ridiculously close I have come to completing this book, and just got interrupted near the end every time, last time by having to move all the way across the country--twice.  (My life has pretty well sucked quite a few times.)  I mean, I have gotten so close to finishing that on my Goodreads account, I just include it in my "Read" shelf, but I want to make an honest reader of myself and actually finish the thing just once.

Hasn't every bibliophile started this book at least once, and haven't 75% of us (at least) found it to be an unconquerable foe?  But I am determined to do it.  I'm just not sure when.

I'm sure I have started this book at least four times, and have never yet gotten past chapter one.  And the first few lines are so captivating, too, or at least I found them so.  Maybe I've got a twisted sort of performance anxiety; the realization that I am holding in my hands one of the most famous tales in all Western literature just causes me to shrink like the proverbial violet.  Well, if three master's degrees doesn't make me qualified to read a great book, I'm not sure what can, so there's no time like the present to try again.  Yeah, yeah, I know..."Do or do not.  There is no 'try'."

I do NOT understand why I cannot keep going in this book!  I've gotten about 20 pages into it at least three times, and it's every bit as delightful and entertaining as Jane always is--and a good deal BETTER than Emma, which I did eventually finish--yet I just never get past those first pages.  I adore Jane Austen!  One of her countless loyal subjects.  I've even read some of her juvenalia.  I MUST read Northanger Abbey!

Just to demonstrate that this list does contain more than one book written in living memory, and more than one genre, here's a YA novel that I've been meaning to read since I was 16.  I won a copy of it as a prize in a Summer Reading Program, picked it out myself because I love medieval fiction, and didn't get through it.  I still own that copy.  I'm determined to read it before I die, at this point just to say I've done it! 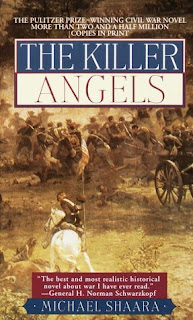 Another modern historical novel, and another plot woven thickly with a multitude of characters, points of view and minute details, but then anything less would do a great injustice to such an enormous subject.  Yeah, I admit it, I'm a sucker for a good Civil War history, even though I tend to present Dorothy Parker Awards to most Civil War romance novels.


This certainly isn't the complete list, but it's more than enough to give you a sampling of what I'm talking about, and to keep me reading for quite some time.  If you look at the double row of tabs for stand-alone pages at the top of this blog, you will see that there is now a new page, called "Victory Garden."  It is on this page where I will announce my triumph over each of my long-standing opponents as they occur.  Check often; I'm determined to settle some of these old scores in 2012 (and hopefully at least one in these final months of 2011!)  Wish me luck.
at 2:54 AM