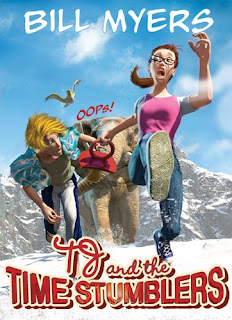 I received this book free from Tyndale, in return for which I must now give them the following honest review.  They're probably wishing they'd charged me for the book right about now.

Honestly, it is painful to me to write this review--though not nearly as painful as it was to read the book--because I really wanted to like the latest installment of Bill Myers' "TJ and the Time Stumblers" series.  Unfortunately, that proved impossible.  First, a bit of back story.  I have not read the previous two books in the series, but I have always enjoyed reading good YA Fiction, so when I started with Tyndale's free-books=review-for-us program, this seemed like a fun, quick read for my first assignment.  Besides, I'm always watching for good books that my daughter might enjoy when she's older.  I'll keep looking.

TJ, our permanently embarrassed 7th-grader heroine, has experienced total upheaval in her life recently.  Her mother died, her family moved to Malibu, and two time-traveling teenaged boys from the 23rd century are plaguing her every waking moment.  In the course of this book, she learns a moral lesson and violates several laws of physics, nature and self-preservation.

The reason I so desparately wanted to like this book was its genuinely funny tone.  The author has a great sense of humor.  But the mounting number of ironic missteps on his part eventually became so distracting that I could not enjoy anything about the work.  Despite a very barbed dig aimed at Harry Potter and fantasy fiction generally (page 47), the two annoying time-travelers are constantly creating accidental messes of epic proportions by waving unexplained devices that make strange noises and then alter the laws of reality.  The fact that these items are supposedly technological instead of magical--and despite the author's clever use of the Swiss Army knife, which it seems, really can do everything--there's not a great deal of difference between shouting a fake Latin phrase to make a book fly across the room and going "ting-tang-walla-walla bing Bang!" to make the contents of a DVD spring to life in the middle of a girl's bedroom (page 46).

Equally ironic was the message, preached in an overwhelmingly pedantic tone, to always think and speak well of others, while the author not only reinforced tired stereotypes, but also took them to an extent that was just mean.  Personally, I don't think my daughter would learn to keep unkind thoughts and statements to herself, while also being told that all girls who live in Malibu "have a thing about perfect skin, perfect tans, and perfect anything else their rich mommies and daddies can afford" (page 10).  Nor was I enamored with being told that one student looked down on another because of "his parents' used car--remember, this is Malibu" (page 70).  The cheap laughs continued when, during a scene in which everyone's thoughts suddenly became audible, the entire jocks' table in the cafeteria simply went silent.  "TJ frowned, trying to hear what was going on in their heads...until she realized it was the jocks' table, which meant nothing was going on" (page 64).  Myers made sure he got all the fodder out of this old chestnut that he possibly could, pointing out several pages later that the jocks "still did not have a thought but knew an excuse for a good fight when they saw one" (pages 70-71).  And I was simply offended by Myers' description of geeks.  "Granted, it wasn't very funny (computer geeks aren't famous for their sense of humor), but it was a lot better than last month's practical joke--the one where they programmed a guided missile to hit the...gymnasium.  (Besides having a lousy sense of humor, geeks aren't fond of PE)" (page 98).  I assure you, I have an excellent sense of humor, and this kind of brutal stereotyping isn't funny.  Nor is joking about students bombing any part of their school.

When Charles Dickens named the world's most dysfunctional school M'choakumchild, it was clever.  The litany of harsh and absurd names in this book is not clever.

The morality tale wrapped up within this book was told with every bit as much subtility as Myers used to name his characters, the result being that he hammered home his point in a book for 13-year-olds with as much nuance and finesse as my toddler's cartoons use to teach her to share.  Thinly veiled recycled material from The Princess Diaries and several other successful pop culture ventures were the final nail in this book's coffin.  I love good YA Fiction, and I don't demand that it be great literature, though I've read some that was.  This is not.