I saw a piece of Flair on Facebook recently that said, "Glitter: the Herpes of the Crafting World," and a thought to which I had been trying to give adequate expression most of my life was finally accessible to my brain.  Glitter is the spawn of Satan!  I'm serious.  That shit gets EVERYWHERE, and there's no getting rid of it, and if you drop one tiny speck of it, it will do the forbidden dance of love with some of its glittery friends in your carpet, and years later you'll be finding its offspring STILL ON YOUR FLOOR!  Glitter is like sand; go to the beach sometime, and see if you're not still finding sand in impossible nooks and crannies of your body a decade later.  Sand and glitter share another common feature; children love both.  God help the mommies of the world.

So, why am I unloading my deep loathing for glitter (and sand) on my innocent readers?  Let me give you a hint; are you at all surprised to learn that this has to do with Brigid the SuperToddler? 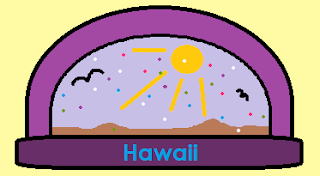 Every year, Brigid's grandmother, my genuinely wonderful mother-in-law, Debbie, goes on vacation to Hawaii.  Debbie feels about snow, cloudy skies, and ambient temperatures below 90 degrees Fahrenheit exactly the way I feel about glitter (and sand).  In my perfect world, I would live in the Fjords, where I could be cold forever.  In Debbie's perfect world, she would send me a postcard in my snow-bound wonderland from her sunchair-strewn beach.  We meet halfway by living in the same city in central Washington state.

Right now, Debbie is on her annual pilgrimage to blistering heat.  On her sacred journey last year, she brought Brigid back what can only be described as a glitter globe, as it sloshes around bits of craft herpes instead of fake snow.  I didn't mind the glitter globe, though; the SuperToddler loved it, and the evil powers seemed to be neutralized by the thick plastic casing and the water in which the glitter swam.  Brigid would happily shake it, the glitter would stay quarantined, I would smile benevolently on a world as it should be, and everyone was content.

I underestimated the malevolent genius of glitter.  Brigid accidentally dropped her glitter globe about three days ago.  The plastic proved to be not nearly so thick and solid as it appeared.  The craft herpes saw its chance, and made a desperate bid for freedom.  I tried to stop it.  It won.  Amidst Brigid's saddened wails of "Broke!  Broke!", which really did rend my mommy heart, the contaminated water seeped into our living room rug.  The water mopped up easily.  The dastardly glitter has not yet BEGUN to quietly lie there multiplying in my carpet.  I have found it on my recliner, on Brigid's feet, on my clothes, on my face.  We didn't spill that much of it.  I cleaned up quite a bit.  I wiped, and swept, and generally tried to be the responsible mother in time of spillage.  I'm still finding bits of this glitter in Brigid's DIAPER AREA, I kid you not.  Take this warning, friends; beware the dire consequences of glitter exposure.  Friends don't let friends have unprotected glitter crafting!
at 12:07 AM