Review of "The Corruptible"

(Ahh, the SuperToddler has calmed down and the house is still, so maybe I will be able to write this review tonight, after all.  We'll give it a shot and see what develops...)

NB:  My Kindle copy of The Corruptible was provided to me gratis by Waterbrook Multnomah Publishing Group, with the understanding that I would, in return, provide them with an honest review of the book.  I have now fulfilled my disclosure obligations, Uncle Sam. 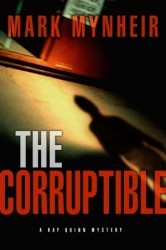 Written by former Marine and current homicide detective Mark Mynheir, The Corruptible is a Christian murder mystery.  If that phrase sounds a little off to you as a genre description, you're not alone; I didn't realize such a thing existed, either, until I read this one.  As an Eastern Orthodox Christian, I've often been a little leary of overtly Christian novels, because they usually seem to push one particular type of Christianity to the exclusion of all others, but I found this novel refreshingly free of that kind of glaring denominationalism.

Police detective Ray Quinn was forcibly retired by a gunshot wound in the first novel of this series (which I have not yet read, but now hope to read soon), and has now opened his own detective agency.  The life of a private eye is not paying as well as he might have hoped, and debts are mounting, when a very lucrative case falls into his lap.  What seems to be a straightforward missing person, however, soons turns into a homicide investigation which has Ray semi-officially working with his former colleagues in the Orlando Police Department.

Mynheir's novel was pleasantly entertaining, with a minimum of preaching and a healthy dose of page-turner plot.  Regular viewers of the hit show CSI will find a few plot points and at least one character uncomfortably familiar, especially since both are set in blistering hot cities, with an odd flavor to them that springs from their predominating business interests.  It is obvious throughout the book, however, that the author speaks from personal experience on matters of evidence-gathering and investigational techniques, and it is not surprising that various forms of popular culture will share similar details, if they've got their facts straight.

Two rather weak characters slow the work down a bit.  Crevis Creighton, the lovable but dopey sidekick, truly is loveable in a hang-dog kind of way, but has such a limited IQ that he's more of a stereotype than a well-rounded character.  The actual client in this case, Armon Meyer, suffers from the typical foibles of a rich businessman in such novels--soulless, devious, slimy with a veneer of respectability, he's utterly flat, again a sort of plot device instead of a person.

Despite those issues, however, The Corruptible was a solid read, kept me guessing until the last chapter, and is full of a wry wit that I found delightful.  I would recommend this book to anyone in search of a decent mystery, especially all those not likely to be put off by the occasional reference to religion.