So.  The Light Barrier.  Broken.  Yes, that's right, geeks and science fans everywhere.  Something verifiably moved faster than the speed of light in Europe today.  Well, actually, for the past three years, and presumably a lot longer than that, if these results turn out to be repeatable, scientifically verifiable evidence.  Let's back up and see the larger picture.

In an almost inexcusably oversimplified manner of speaking, here's what physics looked like on the issue of light speed from the time of Einstein (at least) until now: 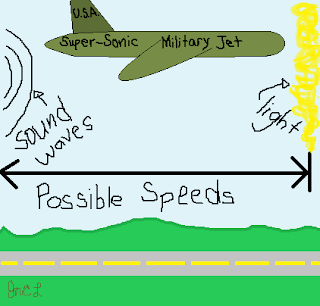 In other words, man can, has, and does on a regular basis, travel faster than the speed of sound.  This achievement was called "breaking the sound barrier."  You'll also notice, in my little diagram, that possible speeds smack head-first into a brick wall when they reach light, because nothing can travel faster than light.  Nothing.  "Not nobody!  Not no how!"  This really sucked for us geeks, because Star Trek and all its children, off-shoots and wannabe-s depend on faster-than-light travel to reach other planets.  Otherwise, it would take so long to reach anything beyond our own solar system that the astronauts would arrive at their destination not even as corpses, but as skeletons.  Really dry, crumbly ones.

But, if the announcement made by CERN (a really serious and super-reliable group of scientists in Europe) turns out to be accurate, and not some kind of massive instrumentation failure that's been happening consistently for three years, physics now looks like this: 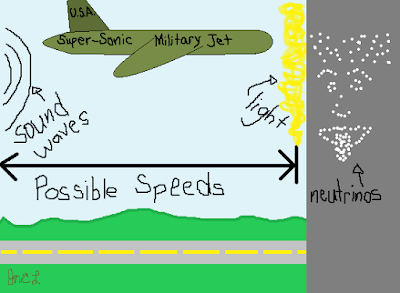 And if ANYTHING really CAN travel faster than light, then as of today, the future quite possibly looks a little more like this: 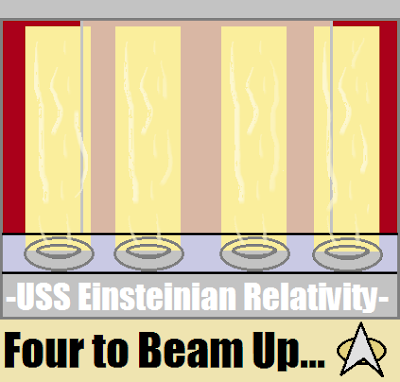