Okay, gang, I will be the first to admit that I've led a sheltered life.  I was always the kid freaking out because I found out my friends had *actually* tried smoking pot once in their lives, and if it was more adventurous than running through the fountain on the campus of my alma mater--which I did once--then it was far too daring for me.  So when I got baffled and irritated in the McDonald's drivethru last night, maybe I was just demonstrating how high my ivory tower has always been.  Maybe this is some new rite-of-passage on which I just never received the memo.

I put it to all of you: has order-and-run drive-up behavior become a new hobby of America's youth?  If so, somebody please clue me in on this.  I was sitting in my car last night, not-quite-patiently waiting to pick up my burgers, but waiting all the same.  The truck in front of me was parked at the window, looking for all the world as if they, too, were innocently waiting for their food, when the window opened, a hand extended an ice cream cone toward the pickup's driver, and the truck drove off.  I thought the driver must have gotten angry about something, and drove off in a huff, but when I got to the window myself and said something about it, the employee working there told me that this was apparently the "customer's" idea of a joke.  Moreover, these annoying pranks are sometimes accompanied by violence, such as projectiles flying at the head of the unsuspecting cashier. 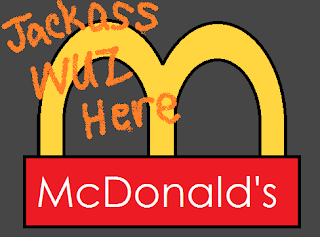 Email ThisBlogThis!Share to TwitterShare to FacebookShare to Pinterest
Labels: WTF