The title of this post is an homage to the famous line that used to be part of all Olympic coverage (and could be still, for all I  know), "The thrill of victory, and the agony of defeat."  Actually, the title is an homage to an old friend who once tried to quote that line, got the wires for "victory" and "agony" crossed in her brain, and produced "vigony" instead.  It fits.  Here's why.

Thus far, I've had four articles published online in less than two weeks.  Victory.  Today, I got an e-mail back about the inquiry letter I sent to a publisher a couple of weeks ago.  This would be about where the "vigony" part comes in.  The e-mail seemed a bit terse and abrupt to me, but maybe I'm just biased.  I'll let you decide. 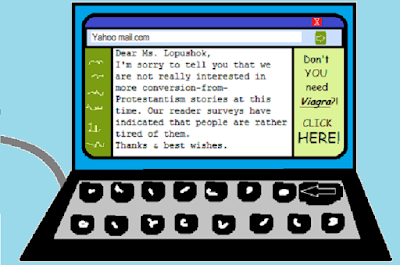 So, there we are; I'm a victim of market research.  Welcome to the exciting world of rejection letters.  It's not the first I've gotten, and it probably won't be the last, but we move on, because if I sat down to mope about it, I know from hard experience that it would be a LONG time before I stood back up again.  That's not a road I want to revisit.  On to the next project--I think I'll shelve that one for a while, then take it to another publisher in a couple of months.  Let the old ego stop stinging a bit.  In the meantime, I'm going to indulge myself and do what any sane person does when their day has mildly sucked--re-read Harry Potter!
at 1:29 AM